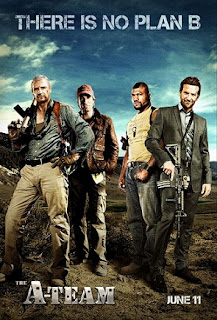 The 1980s was an ugly, garish decade for popular culture. The television schedules were overflowing with brightly lit, overly violent and poorly plotted action-adventure shows. Easily the king of that particular castle was The A-Team, a series created by Stephen J. Cannell and Frank Lupo. It followed a team of four wrongly convicted Vietnam veterans, who helped out people in need while running from the authorities. It wasn't a series with characters, but rather a group of names attached to catchphrases. There was former Colonel John "Hannibal" Smith (George Peppard), former Lieutenant Faceman "Face" Peck (Dirk Benedict), former Captain H.M. "Howling Mad" Murdock, and former Sergeant Albert B.A. "Bad Attitude" Baracus (Mr T).

Pretty much everybody watched the TV series when it was on - it was pretty much the most popular television series on the planet for a year or two. While many retain a nostalgic affection for The A-Team it must be said that it's a dreadful series: witless, repetitive, unremittingly macho, and corny as all hell. It is not simply a case of the series dating badly over time. I have no doubt it was as awful a confection in 1983 as it is on re-runs today.

Good or bad it was still popular, and popularity means there's a brand-name recognition, and if there's a recognised brand then there is an audience potentially willing to return to that brand. As a result five years ago 20th Century Fox produced a feature film adaptation starring Liam Neeson and Bradley Cooper.

It's been updated a bit - they're Iraqi occupation soldiers now, rather than Vietnam veterans - but the basic format of wise-cracking ex-soldiers shooting things while taking on bad guys in a superficial manner has been retained. The film does give the television series the origin story it never really had. We see their failed mission, the betrayal, their incarceration and their escape. I'm not entire sure the world was feeling the absence of an authoritative origin for The A-Team, but just in case 20th Century Fox have provided one.

The story is relatively simple, and emphasises silly action and jokes over logic or sense. It is by no definition the best kind of action film that Hollywood can provide. At the same time it's nowhere close to the worst. It's an amiable, dumb, immensely silly movie that coasts by on the goodwill of a nostalgic audience and some fairly entertaining casting choices.

It's genuinely nice to see Liam Neeson lead an action film in which his character isn't morbidly depressed or brutally unforgiving. His hair is visibly artificially dyed grey to match his television counterpart, but its a fakeness with which we can live. Bradley Cooper is a cocky and appealing co-lead: it feels like he's performing in this film with something to prove, establishing himself as a viable Hollywood star outside of the Hangover movies. Quinton Jackson wisely doesn't copy Mr T too much as B.A. Baracus, allowing his character to step back a little from the spotlight and not suffering too much by comparison. Sharlto Copley attempts the opposite, overplaying his role (Murdock) a little too much and going a little too far; of the four he's the least successful.

Patrick Wilson does a nice job playing the film's arrogant, smarmy CIA villain, but it's Jessica Biel I appreciated the most as the dogged army Lieutenant Sosa. The original A-Team didn't go so well with female characters. They did have them, but they never treated them very well (either in front of or behind the screen). While Sosa does remain stereotypically linked to the team via a love affair with Face, she still manages to exert an awful lot of authority and strength. It's unfortunate Biel has never managed to become a more successful actor. She's had several chances - Blade Trinity, Total Recall and this film here - but for whatever reason a mass audience hasn't quite been taken with her. It's a shame.

This is not the best film ever made by any of its cast or crew. Director Joe Carnahan has also directed Narc and The Grey, which are both much more accomplished and well-crafted films, but to be honest neither of them have quite the same enthused silly energy that he brings to The A-Team. It's not a great film, but it is an unexpectedly enjoyable one.
Posted by Grant at 7:25 AM