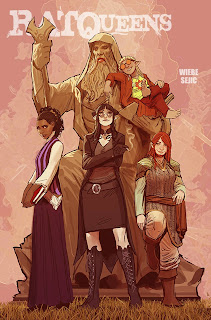 Rat Queens, in case you're living in a cave, is a laugh-out-loud comedic adventure comic. It's a drunken brawl through a fantasy world filled with poor behaviour, sex, drugs, goblins, wizards and ancient evils from before the dawn of time. It has four protagonists that pretty much fit the standard Dungeons & Dragons template, with the exception that they're all women.

The book has had a bit of a struggle in the past year, with co-creator and artist Roc Upchurch retiring from the book after an arrest for domestic violence, and then replacement artist Stjepan Sejic jumped ship after only a handful of issues. With the beginning of the third story arc writer Kurtis J. Weibe is joined by Tess Fowler, who previously provided art for a one-off special some months back. While her art isn't quite as accomplished as Upchurch's, it does feel like a better fit than Sejic's. I'm looking forward to seeing how it develops as her run goes.

As for the plot, it's the usual combination of violence, comedy, snarky behaviour and inadvisable life choices. It's a beautiful set of characters, and it's great to see Weibe explore each of their backgrounds one at a time. In this case it's Hannah, the elven wizard with the awesome hairstyles, and her complicated relationship with her father. It's great stuff. (4/5)

Under the cut: reviews of Doctor Who: Four Doctors, Giant Days and Revival.

The 10th, 11th and 12th Doctors have met in a Parisian cafe, breaching a fixed point in time and calling a pack of Reapers into existence to remove them. This is actually a slightly stronger issue than the first: the characterisation of the three Doctors - mainly their bickering - feels true to their TV versions, and Paul Cornell has deftly woven in a whole raft of funny quips, continuity references and the like. The arrival of the Reapers is a welcome development: they were used in Cornell's own 2005 episode "Father's Day" but haven't been since. Neil Edwards is illustrating the book very well. I'm liking the weekly schedule as well, which gives the story a momentum it would probably lose if released one issue a month. (4/5)

Susan's gone missing in her home town, so her friends set off to find her. This issue marks a weird change of pace for Giant Days. It's previously been a sort of lazy, amiable character comedy: easy to read, pleasantly enjoyable, not too taxing. While those elements are there, this issue is much more aggressively plotted and paced. The jokes are pushed to the forefront, and there's more plot going on that one usually gets. I liked it a lot. (4/5)

In a long-running serial narrative, some issues are going to feel more momentous than others. The latest issue of Revival is one of those 'big moment' issues, finally hitting a critical mass and dropping a major plot development. It's a heart-breaking story that focuses very closely on the sisters Em and Dana Cypress: one of them a police officer, and the other supernaturally 'revived' after death and now threatening to kill someone. It's tense, action-packed, and beautifully sad. As always Mike Norton's artwork enhances the characterisation wonderfully. This continues to be one of my favourite comics on the market today. (5/5)
Posted by Grant at 5:19 PM