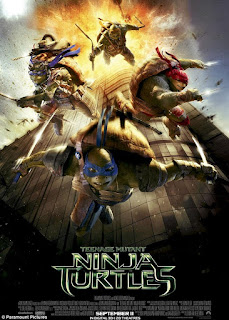 Last year Nickelodeon Films and Michael Bay's Platinum Dunes collaborated on producing an all-new live-action adaptation of Teenage Mutant Ninja Turtles. Now I am a huge fan of the Turtles. I've read the original comic books and their more recent follow-ups. I have watched the various television cartoons. I have played many of the videogames. I have Ninja Turtle figurines in a cabinet of similar pop culture-based figurines in my house. I have seen all four preceding Turtles films in the cinema - this was the first adaptation I didn't manage to see in a theatre, partly due to lifestyle constraints and partly because it got extremely negative reviews.

Despite the bad word of mouth the completist in me compelled me to rent a DVD and watch the thing, and make up my own mind. I went in feeling positive. There have been plenty of occasions where a Hollywood film has been critically mauled, but I have found much in it to enjoy. I also maintain high hopes for the film's director Jonathan Liebesman, who seems to be making a career out of directing visually interesting films with really poor screenplays like Battle: Los Angeles and Wrath of the Titans. He's surely one decent screenplay away from actually directing something decent.

Sadly in this case the film is exactly as bad as its critical reception suggests. Teenage Mutant Ninja Turtles is a loud, sloppy, incoherent mess. I went in hoping to at least find some enjoyment. I came out with a list of questions.

Why muck around with the characters' back story so much? This film re-imagines the Turtles' origin to have them be laboratory experiments named by the young April O'Neil (Megan Fox), freed into the sewer by her when the laboratory is burned to the ground by April's scientist father, who was collaborating with an industrialist (William Fichtner) to develop a cure for a virus they had themselves created to blackmail the city - or, at least, Fichtner had, the film never really makes April's father's position clear - before having a change of heart. 15 years later April is now an aspiring journalist who stumbles onto the Turtles while investigating robberies around New York City by the Foot Clan, which is led by Oroku Saki aka the Shredder, who was in league with Fichtner's industrialist all the time. Or something. That brings me to my next question, I suppose, which is why this storyline? The plot is so haphazardly and loosely strung together, I don't really remember the precise details. The filmmakers clearly didn't care so much, so perhaps I shouldn't either. For one thing the villain's plot involves blackmailing New York City for the cure to a virus he's going to secretly unleash from the top of a building with his name on it.

Why visually re-imagine the Turtles so much? They're a full two feet taller than usual, and built like pro-wrestlers, which must make jumping in and out of sewer manholes a problem. They've been rendered in some semi-realistic fashion that gives them noses. Visually they look awful. The original designs were immensely effective, to the point that every other iteration since the 1980s has followed the same basic model. This film tries something different, and it's an embarrassing failure.

What happened in the editing process? The film is positively incoherent in structural story and pacing terms as well as on a shot-to-shot basis. The action sequences are near-impossible to comprehend, which is actually a shame since one of them - a car chase down a snow-capped mountainside - is actually rather good, if you could properly see what was going on.

I know this is a petty one, but why did the film try to explain the name of the Foot Clan? Its name is a joke aimed at 1980s Daredevil readers - it probably didn't need a tortured in-universe explanation.

Fundamentally, however, why make this movie? Let me re-emphasise slightly, since I understand Nickelodeon bought the Ninja Turtles rights for a lot of money and want to profit from that purchase wherever possible: why make this movie? Of all the iterations imaginable of the franchise, why make one with weird ugly giant versions of the characters, Megan Fox as April O'Neil, and regular seedy quips by Michaelangelo about how much he wants to have sex with April? Why make a version with jokes about staring at Megan Fox's bottom?

And what the holy hell did you guys do to the Shredder? I swear there was a series of production meetings where artists showed Liebesman and Bay drawings of the Shredder, to which they replied "more knives", which resulted in further design work, which resulted in tern of them shouting 'more knives!!' until we finally reached the ridiculous and laughable monstrosity we got to see on-screen.

There's currently a CGI animated series on Nickelodeon right now that is pretty much the best screen adaptation of the characters ever made. The characters are funny and well realised. The dialogue is genuinely amusing and the stories are fast-paced. There's so much done well in the TV series that one wonders why Nickelodeon simply didn't ask the production team to develop and produce this adaptation. It could have been pitched a little older still, and done in live-action with CGI Turtles, but it really could have benefited by the economy of storytelling and deftness of touch demonstrated on television.

This is a dreadful film. Sadly it made just enough in cinemas to convince Paramount and Nickelodeon to bankroll a 2016 sequel. Just so they know: there's no rush.
Posted by Grant at 8:42 PM