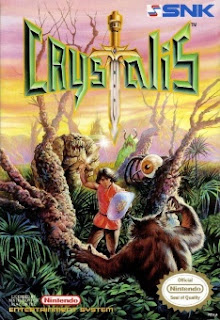 One hundred years after the Earth is decimated in a terrifying war, a lone survivor is revived from cryogenic suspension. He finds a world completely changed, and now filled with strange monsters, magic and small pockets of human civilization. Discovered what has happened to the world, and defeating the evil Draygonia Empire, forms the story of Crystalis - a 1990 action-RPG produced by Japanese publisher SNK.

The RPG genre only really took off in Japan towards the end of the NES/Famicom life-span, and flourished on their successor consoles. As a result solid RPG titles are often few and far between for the NES, particularly since most of the games that did get produced didn't get ported over from the Famicom. Crystalis is a rare and highly enjoyable exception. It's a game that feels a good three or four years ahead of its time, and still presents an enjoyable challenge today. 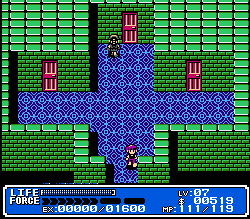 All of the hallmarks of the action-RPG genre are in evidence. Combat is performed arcade-style, rather than by the menus popularised by Final Fantasy. Players can learn and cast spells. Like The Legend of Zelda, the game divides its time between overland travel and site-specific dungeons. The player's quest is to retrieve four different swords, each of which grants them a single power. United, they form the super-sword that will enable the player to defeat the evil Emperor Draygon. The graphics have a distinctive look to them, and the music is remarkably catchy. It's impressive on its own merits, but doubly so when you remember it's only been produced for the NES.

Sadly, while the game did make it as far as the USA a European port never eventuated. It was re-released 10 years later for the Gameboy Color, allowing many of the players who missed out the first time the chance to buy and play a copy of their own. Still more have discovered this game long after the fact via emulation. It's worth tracking down: it's a really enjoyable game.
Posted by Grant at 4:32 PM