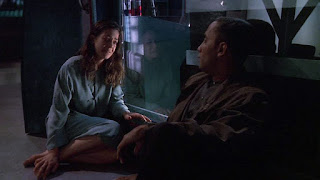 If "Endgame" was all climax, then "Rising Star" is - not unsurprisingly - all epilogue. There's no strong narrative drive to what happens, just a series of scenes showcasing character and resolving old conflicts. It's the episode that ties up loose ends, points to the future, and generally wraps things up with a bow. It does it very well. In fact, it does it so exceptionally well that it's difficult to see where the series is going to go for another 23 episodes.

Here's the thing, which I have alluded to in previous episodes but never really explained in depth: Babylon 5 was conceived as a five year series, with a pre-developed beginning, middle and end. Now we can debate for an absolute age just how firm or how loose that original conception was, and unless we were there when they made it we'll probably never know, but the important thing is that there was a story planned for a five season length.

The series was originally broadcast on PTEN, a cable network set up by Warner Bros Television and Chris-Craft Industries. When both partners went off and established their own free-to-air networks (UPN and WB), and with affiliated stations taking umbrage over the channel's allocation of local commercial time, PTEN was dissolved in late 1997. This left Babylon 5 four years into its five-year arc, and with no one left to broadcast it. Selling a television drama is a tough business, and selling a television drama for only one more season is an order of magnitude tougher. By some miracle the fifth season was sold to TNT, but by the time this happened much of Season 4 had already been developed, written and shot.

To his credit as both writer and executive producer, J. Michael Straczynski went into Season 4 as if it was going to be the final year. The story arcs were bunched up a little, and the first few episodes of Season 5 were pulled into place to ensure that - while a few loose ends would remain - the series could wind up in a fashion that would be satisfying for its audience. As I noted in an earlier review, "Intersections in Real Time" was the original Season 4 finale.

In many respects, then, "Rising Star" is a victim of circumstance. It's great at what it does, but by the time it aired what it was doing was no longer the right thing. It does such an outstanding job of closing off the series and its story that I'm struggling to imagine what there is left to tell in Season 5.

There is lots in this episode that works. There's a prolonged scene at the beginning between Ivanova and Franklin (Richard Biggs) that's the best piece of acting I've ever seen Claudia Christian do. I've never been a fan of Ivanova - both in terms of how she was written or how Christian performed - but this scene is damn close to faultless. Richard Biggs does a great job with it too - it's actually very hard to act when someone else is doing all the talking, but he does it wonderfully. To an extent we're denied a proper farewell for Marcus Cole - he dies between the closing credits of last episode and the beginning of this one - but this scene of mourning is arguably better than any final goodbye in person could have been.

Garibaldi (Jerry Doyle) tracking down and rescuing Lise Hampton (Denise Gentile) is done efficiently and swiftly, and giving both characters some nice resolution. Sheridan's transition from Earth Force captain to forced retiree to Interstellar Alliance President is similarly efficient in how its told, but in terms of scene-by-scene drama it comes across as a little more awkward. Beata Pozniak is slightly out of place as interim President Luchenko: I'm honestly not sure if it's the acting or the writing, but she feels a little like she's acting in a different series to everybody else.

In its own right this probably isn't the best episode, but it benefits from having the full weight of four seasons pushing behind it. It really does feel like the end of the series. You could turn off now, never watch the actual Season 4 finale nor any of Season 5, and you'd only know you'd missing something if somebody told you. We're now 21 episodes through Season 4, and 15 of them have been good. The quality ratio rises to 71 per cent. Not bad for a season I quit watching back in 1997.
Posted by Grant at 5:48 PM