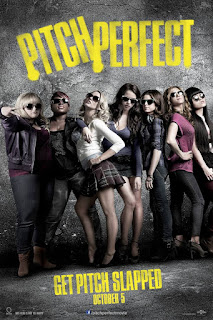 Becca (Anna Kendrick) wants to move to Los Angeles to break into music production, but instead finds herself forced into attending one year of college before making up her mind. While there she joins an acapella singing chorus in the middle of a crisis: their act has grown stale and their lead performer destroyed their chances of making the previous year's final after an embarrassing incident during the semis.

Pretty much everything else that happens you'll likely guess before it happens: not because Pitch Perfect is a bad film, but because it's a film running to a well-rehearsed and enjoyable formula. I'm seeing a temptation to label Pitch Perfect an acapella group remake of Sumo Do, Sumo Don't, since the two films seem to share identical storylines based on different university hobby groups. The thing is that I'm pretty certain Sumo Do was not the first film in this specific sub-genre of movie comedy either. We don't watch these kinds of films expecting to be surprised or blind-sided. We watch them because we want to be entertained, and within the confines of its college setting, musical background and comedy genre, Pitch Perfect is really enjoyable.

Much of the film's success is based on the quality of its cast, who uniformly show great screen presence and impeccable comic timing. Anna Kendrick is a great actor - she was sensational in Up in the Air, for example - and she does a good job in the lead here. The supporting cast around her seem equally accomplished. The characters are very broadly drawn, but each of their personalities drives a few more of the jokes that keep the comedy going. There are a few laugh-out-loud moments, but for the most part the film simply keeps the viewer smiling amiably. This is basically quality cinema as comfort food.

The film's music is what it is: young people singing acapella versions of mostly contemporary pop hits. If you're of a similar level of music culture awareness as me, that means an awful lot of songs where you immediately recognise having heard it before without knowing what it's called or who sang it or - to be frank - particularly liking it. They are very well arranged, however, and it's hard not to be impressed by this acapella musical form. Simple Minds' "Don't You Forget About Me" is particularly venerated in the film, and to a small extent Pitch Perfect steals from The Breakfast Club to make its own climax work.

It's difficult to criticise this one. One could argue that some of the more gross-out comedy moments are misplaced, but I think they're simply representative of a genre that has been changing post-Bridesmaids. Pitch Perfect is a film in a specific style for a specific audience, and in that regard it's pretty much right on the money. If it looks like the sort of film you'd like, you'll probably love it. Even if it isn't the sort of film you would normally watch, it's good enough that you'll likely still find much to enjoy.
Posted by Grant at 8:50 AM