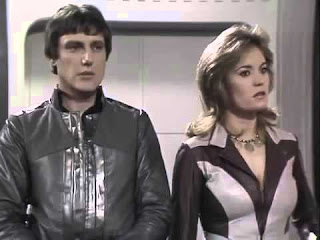 Someone is using an interstellar signal to influence Blake's mind and put him under control. It forces a mutiny on his ship, but does ultimately take him to the asteroid PK-118 - where he comes face to face with a presumed-dead resistance leader and a prominent Federation defector. That defector is Ven Glynd: the judge who sentenced Blake to Cygnus Alpha.

"Voice from the Past", by new writer Roger Parkes, is a mixture of good and bad elements. Sadly the lesser aspects of the episode do tend to overwhelm the better ones. It's one of those cases where you can see what the writer and the production team were attempting to do, but you can also see that they failed for a couple of obvious reasons.

First up there's the whole problem with Ven Glynd. He's played here by Richard Bebb, but in "The Way Back" he was played by Robert James. I also don't recall him actually meeting Blake face to face then, so the connection between the two here seems tenuous at best. The mysterious signal affecting Blake's mind also seems to be giving him flashbacks in his dreams, except the details Blake is remembering appear to be from his first trial before the series began, and not from the second when Glynd was involved. It all becomes rather confusing.

The second problem is that for Vila to help Blake during a mutiny, which he does, the character has to basically become significantly more stupid than usual. Michael Keating does his best to be convincing, but he's not helped by Gareth Thomas playing Blake very far out of character while under the influence of the signal.

Then there's the bandaged, terribly disfigured rebel leader Shivan, who is clearly Space Commander Travis in a bad disguise. It's obvious from his first scene that he's Travis, partly because there's immediately no narrative reason for him to be in the story other than to be a villain in disguise, and partly because you can hear it's Brian Croucher playing him. It ultimately makes no sense for Travis to be there either - last time we saw him he was running rogue from both Servalan and Blake. Now he's apparently a key part of Servalan's trap.

Travis has been popping up an awful lot this season, and this episode is definitely the point where he has outstayed his welcome. He reminds me of the Master's first year in Doctor Who, where no matter where the Doctor and Jo went or what they investigated, a shock revelation revealed that the Master was behind it. In the second story it's understandable for the Doctor to seem surprised. By the fifth it's a wonder he didn't just get down on his hands and knees and beg 'please for the love of God just piss off.' Travis is now basically in that position: he's hounded Blake like there's no tomorrow, but I just want him to go away for a while.

So what works? For one thing pairing Avon and Cally is a master stroke. They work well together, with Paul Darrow and Jan Chappell clearly relishing their scenes, and it's a combination we haven't really seen since "Mission to Destiny" all the way back in Season 1. It's great to see Cally actually do something for a change, other than act as nursemaid to the rest of the crew.

The climax is also very satisfying in an odd way. The sight of the assembled defectors proudly stepping into an empty auditorium - only to discover that the entire conference is trap by Servalan - is wonderfully done. It helps to push one of the constant themes of Blake's 7: that the Federation wins. Blake may win small victories, and keep the Federation and Space Command on their toes, but he never wins any significant victory. The point is driven home even harder by the revelation that the Federation's rulers knew of Glynd and Le Grand's plans from the very beginning: at no point did they even have a hope of succeeding.

It's one of the reasons I've always adored Blake's 7. Some people love the series for Avon and Vila, and the acerbic dialogue, and the insanely over-the-top costumes, and I do love those things. The deep, horrible undercurrent of inevitable failure, however, is to my mind the series' best aspect. There really haven't been many shows like it - not science fiction ones, anyway.

Try as I might, I just can't give my approval to this episode. We're now 10 episodes into the season, and six of them have been good. That gives Season 2 a quality ratio of 60 per cent.
Posted by Grant at 5:22 PM