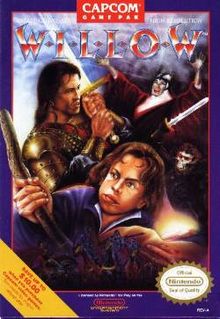 There are some phenomena in videogames that can result in pretty awful stuff. One of those is clones: take a previously existing game, change the graphics and little and maybe tinker with the gameplay around the edges, and release your own successful title by effectively riding the coat-tails of someone else's. Another is licensed titles: base your game on a movie, or a TV series, or a cartoon. Brand recognition will lead enough people to buy your title that you don't need to bother enticing them with good graphics and sound or quality gameplay. It's a general rule that licensed games aren't worth playing, because those that are worth playing (like Rare's GoldenEye 007, for example) are so far and few between that it's not worth the time hunting them down.

Willow, a Capcom game released in 1989, is both a licensed title - it adapts the Ron Howard fantasy film - and a clone - it mercilessly rips off Nintendo's own The Legend of Zelda. 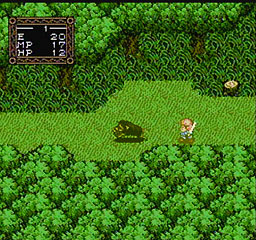 By all accounts it should be a double whammy. It should be awful. Instead it's remarkably well executed and highly enjoyable to play. Sure it's not as good as the game it's copying, but few titles on the NES were.

The player controls Willow Ulfgood, an aspiring Nelwyn wizard tasked with destroying the evil witch queen Bavmorda. The actual plot details within the game vary pretty wildly from the feature film. It seems likely that Capcom were already developing an action-RPG title for the NES and simply took the opportunity of applying the Willow license and characters to it.

Gameplay consists of running errands and small adventure tasks, interspersed with action-based combat either out on the road or in one of the game's dungeon levels. It copies pretty much the entire basic mechanic of The Legend of Zelda, but it copies it remarkably well. Even without the Willow license it would stand up as a notable videogame in its own right. Given the fairly radical transformation in style that Nintendo gave their own Zelda sequel (The Adventure of Link), it's arguable that Willow was the more accurate follow-up. It also benefits from being a few years older, and able to present particularly subtle and attractive graphics for an NES title.

Sure it's derivative, and a licensed title, both of which are usually hallmarks of a poor game, but if you're going to be derivative you may as well do it as stylishly as Capcom did here.
Posted by Grant at 7:19 AM