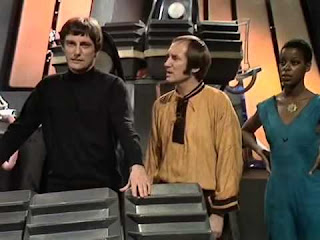 Orac (Peter Tuddenham) manipulates the Liberator to fly through a black hole. When the ship miraculously survives the journey, Avon (Paul Darrow) and his crew find themselves trapped in the world of the Thaarn, a legendary figure from Auron's mythology.

Some episodes of Blake's 7 are pretty great. Some are pretty awful. Occasionally one comes along that just raises your eyebrow, as you struggle to work out whether it's egregiously awful or actually a weird kind of brilliant. I think "Dawn of the Gods" certainly qualifies. The previous record-holder for weirdest Blake's 7 episode ever was Season 2's "Gambit", but I think that record has been easily broken by this episode, which assembles together board gaming, black holes, pocket universes, alien gods, the Mad Hatter, and maths. It all adds up to some kind of hypnotically awful nonsense - I wanted to hate it, yet I couldn't bring myself to look away.

In many respects this episode is a throwback to the old two-act structures of Season 1. The episode's first half concerns itself primarily with the Liberator's slide into the black hole, with Orac murderously intent upon investigating the phenomenon up close. The computer's curiosity is so great that it commandeers the entire ship to do it. Quite why anyone would risk using Orac ever again after this episode is beyond me. The human crew don't notice at first, because they're too busy playing Space Monopoly - this is quite possibly the weirdest thing they will do in all four seasons of the show. It's relatively difficult comprehending a situation where Avon, Vila, Cally and Dayna would all sit down and relax with a board game. All I can say is that the urge to overthrow the Federation has well and truly left with Blake's departure.

When it becomes clear the Liberator is about to slide into a black hole, killing everybody, Avon weirdly attempts to put on a space suit - as if that will somehow protect him. What's stranger is Tarrant's violent attempts to pull the suit off him, arguing that everyone needs to die together. When it's apparent that they have in fact survived, Tarrant (Steven Pacey) complains that one day he may have to kill Avon. Avon smiles at this, admitting 'it has been tried'. If I was Tarrant I'd be watching my back every day I continue to live onboard the Liberator. This all isn't poor characterisation; it's nonsensical characterisation. It's also the first of several shifts for Tarrant's character from dashing young hero to mean-spirited, aggressive bully. They never really do make up their mind what sort of person he's supposed to be.

There are two changes taking place with regards to Vila (Michael Keating) that, while not necessarily initiated by this episode, certainly stood out. The first is his increasing alcoholism. It used to just be Allan Prior who'd write in Vila's obsession with getting drunk on 'adrenalin and soma'. Now James Follett (a new writer to the series) is including him taking desperate little swigs from the bottle as well. The second change is the manner in which the rest of the cast are beginning to bully him. In Seasons 1 and 2 he perhaps irritated Blake or Avon from time to time, or caused Jenna or Cally to roll their eyes, but from here he's actively being targeted for scorn and ridicule. It's slightly unpleasant.

Once inside the black hole there are actually a few quite decent sequences. Vila is sent out onto the surface of the Liberator to make some repairs, only to find there's gravity outside and a ground about two metres from the exit hatch. I will leave it to smarter types to work out exactly how a ship the size and shape of the Liberator can achieve this on what's described as a massive cavern with a smooth flat floor. Once outside he's accosted by a strange mechanical set of glowing lights, and appears to be killed by it. In retrospect it's obvious that he's not dead, but the first time around it feels entirely possible - after all, Gan died during a random episode, so why not Vila as well? Vila's discovery of broken and dismantled starship parts all around the Liberator is also nicely intriguing.

Then the crew are captured by the Thaarn, whose servant is the weirdly dressed Caliph - an aristocratic man dressed as Lewis Carroll's Mad Hatter. It's at this point that the episode just becomes bizarrely nonsensical. Avon and Tarrant are sent to work out physics equations for the Thaarn, while Cally is taken to meet the Auron demon himself. Cally's escape from this powerfully psychic creature is oddly simplistic, and the revelation of the Thaarn himself oddly anti-climactic. After that it's all just a quick escape back to the Liberator to get the hell out of Dodge.

Let's not mince words: "Dawn of the Gods" is a terrible episode. It's weakly written, and nobody acting in it seems to have much enthusiasm. It has so many utterly bizarre details, however, and inexplicable creative choices, that it's ultimately kind of addictive. It's worth keeping in mind: this is what counted for prime-time television drama in 1980. British television isn't always Edge of Darkness and Tinker Tailor Soldier Spy. Sometimes it's the Mad Hatter forcing people to do maths problems at the behest of a psychic dwarf.

We're four episodes into Season 3, and only the first two have actually been much good. The quality ratio slips worryingly to 50 per cent.
Posted by Grant at 8:04 PM