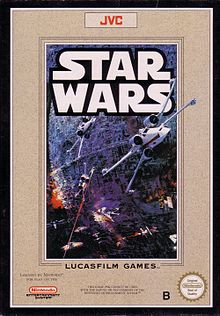 I swear that it's entirely a coincidence that I'm talking about two licensed titles in a row. Even more coincidentally, they're both adaptations of Lucasfilm titles. Star Wars came out for the NES in 1991, when there was suddenly a flurry of activity circling the property. In June 1991 Bantam Spectra published Heir to the Empire, the first original Star Wars novel in almost a decade. By December Dark Horse comics had published the first new Star Wars comic book in about as long. The following year the Super Nintendo would receive an immensely popular platform action game based on the film, but before that there was this half-forgotten dry run produced for the NES.

Star Wars is a platform game that follows the plot of the original film. All of the film's various settings and action scenes have been adapted to side-scrolling beat-em-ups akin to Double Dragon, with locations on Tatooine connected by a top-down map. There's an element of interactivity in how the player approaches these early levels, taking them in whatever order is most comfortable, or skipping tricky levels in order to power up in easier levels first.

The graphics have a nice cartoony look to them, taking advantage of the relatively small sprites to give the characters an appealing and stylised aesthetic. The player is even able to control multiple characters: Luke is the primary character, but it's also possible to play as Han Solo or Princess Leia - although they each have one life each compared to Luke's five.

Given that Star Wars videogames produced while the films were originally being released were quite primitive and limited, the NES Star Wars felt like a genuine breath of fresh air. In the following years all manner of excellent titles were released for both consoles and home computers, to the extent that this particularly title got forgotten to some extent. It's still wonderfully playable today.

The game was developed by Beam Software, an Australian developer whose previous games had been aimed solely at the local market. The following year George Lucas' own developer LucasArts took more direct control and co-developed a sequel, The Empire Strikes Back, with Sculptured Software. Released very late in the NES' life-cycle, it was quite difficult to find. With gamers moving to the next generation of consoles, a Return of the Jedi game was never produced.
Posted by Grant at 5:16 PM