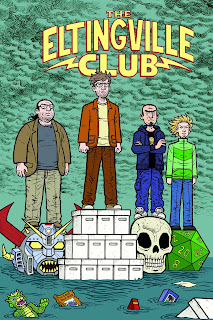 Since 1994 Evan Dorkin has been produced an occasional series of comic stories based on the Eltingville Club, a group of four teenage comic book nerds who get together and basically make a disaster of things. They are the most crude and offensive stereotype of the comic geek, with all of the nastier elements pushed to extremes. It's a fantastic series, fiercely criticising comic book culture in the sharpest and most repulsive way imaginable. I've always found it funny, however I strongly suspect they're an acquired taste. Certainly they weren't to the Cartoon Network's taste, when they commissioned and then rejected an animated TV pilot in 2002.

Last year Dark Horse published The Eltingville Club #1, in which the four members trashed and burned a comic book shop to the ground, swearing never to speak to one another again. The much-delayed The Eltingville Club #2 was published this week, in which the boys - now in their mid-20s - meet one another again for the first time in a decade at Comic-Con.

It's easy to see why this second and final issue took Dorkin so long. There's a detail and intricacy to the artwork that I've never seen him do before. His iconic cartoonish style remains, but here it's drawn out in a much more accomplished fashion than ever before. It's also packed with lengthy dialogue - mostly rants and diatribes - which combine with the artwork to create a very dense comic book indeed. This isn't something you're going to flip through within three minutes.

It's a savage, twisted, repellent finale to the characters, showing that some people - while growing older - don't necessarily ever grow up. As the conclusion of the story and a farewell to the characters, it's pretty much as great as you could want it to be. (5/5)

Under the cut: reviews of Empire Uprising, Star Trek/Green Lantern and String Divers.

Golgoth's grip over the planet seems to be more tenuous than ever in this issue, which focuses upon his Minister of Religion Valpurgis beginning to suffer doubts about his master's infallibility. Barry Kitson's artwork grabs my attention every time a new issue of Empire Uprising comes out. It's so specifically mid-1990s in style, and so beautifully done. I really do like this style of artwork, and it makes me happy to see it used so effectively. This is a pretty bleak comic, but a very enjoyable one. (4/5)

Like Titan's Doctor Who: Four Doctors, this crossover between Star Trek and Green Lantern is pure indulgent fan service from beginning to end. It's got Uhura as a Star Sapphire, Chekov as a Blue Lantern, Star Trek VI's General Chang joining the Sinestro Corps, a Gorn Red Lantern and a Romulan Orange Lantern. So basically it's all very silly and ridiculous, but thankfully it seems to know it. This issue goes for big moments with lots of large panels and splash pages. While Angel Hernandez's artwork is good, and definitely handles the big panels well, it does make for a pretty brief and inconsequential read. It is what it is. (2/5)

Ashley Wood, clearly not satisfied with simply creating and illustrating comic books, is now expanding to a toy/comic franchise, essentially remaking Micronauts with the serial numbers shaved off. This first issue introduces the so-called "string divers", who explore microscopic environments fighting weird monsters. This book has very simple, clean-line art by Wood's standards, which came as a bit of a surprise. It's solid enough, but doesn't really feel like it's playing to his visual strengths. The script by Chris Ryall and Nelson Daniel is satisfying without really pushing any fresh boundaries. The book has potential, and is probably worth checking out if you're looking for a new sci-fi action comic. (3/5)
Posted by Grant at 10:59 AM