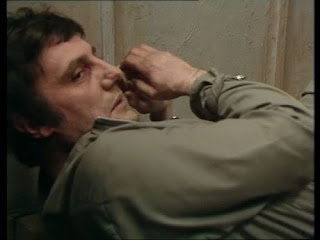 Avon (Paul Darrow) has been captured and tortured by Federation security - but it's all a ruse to get close to the interrogator who murdered his lover. Servalan (Jacqueline Pearce) prepares to host the Federation council at her freshly built Presidential palace - unaware that a political coup d'etat is about to be launched.

"Rumours of Death" draws together three long-buried strands of series back story, and ties them together into a remarkable episode. We knew as far back as "Space Fall" that Avon had attempted to defraud the Federation banking system of millions of credits. In Season 2's "Countdown" we met Del Grant, brother to Avon's murdered lover Anna. Throughout Season 3 we've seen and heard references to the Federation's struggle to re-establish control in the wake of the intergalactic war. Now the Federation appears to have gone a long way to re-asserting its authority, and Avon is finally tracking down Anna's murderer.

Much as "City at the Edge of the World" provided a showcase of Vila (Michael Keating), so "Rumours of Death" does the same thing for Avon. This is Paul Darrow's episode through and through, with an excellent script that demonstrates multiple facets of his personality. We see his typical dry exterior, but also moments of weakness, confusion and sadness. We also get to see him at about the most casually murderous he has ever been. We've seen him kill before, in self-defence or in fighting the Federation. This is the first episode where we see him stone-cold murder a person, without the slightest flicker of remorse. It's a bold progression for any character, but doubly so when that character has been positioned as the de facto protagonist of the entire series. It's hard to imagine any other science fiction TV hero being so utterly cold and without pity. Certainly it's the darkest this series has been since it started.

The episode cleverly juggles two storylines, and jumps back and forth between them. In the first, Avon learns the identity of Anna's murderer - not his first target but instead an agent named Bartholemew - and sets about ambushing Servalan to ascertain their true identity. In the second we watch the launch of a violent coup d'etat of Servalan's presidency, led by a woman named Sula (Lorna Heilbron). The episode makes no secret that Sula is Anna Grant - clearly not quite as dead as Avon had been led to believe. How she has survived, and what happens when Avon learns she is alive, forms much of the suspense as we go through.

It's clear from the second plotline that the Federation, while diminished, is pulling itself back into shape and asserting control over at least its inner circle of colonies. It's also clear that Servalan has successfully managed to remain at the top of the government, despite growing opposition and at least one threat against her life. It's a great episode for Jacqueline Pearce, who gets to play Servalan the way she was played in the first two seasons: vain, seductive, manipulative, and remorseless in her maintaining power. There's also a surprising connection between her and Avon during the episode's climax. At one point she seems genuinely sad knowing precisely what terrible secret he is about to learn. Sure she may then try to kill him, but when that attempt fails to work out she almost seems relieved.

The episode concludes in the manner of all Blake's 7 episodes - in a sort of melancholic failure. Avon may have put his demons to rest, but there's also a growing change in his character. He grows progressively less concerned with other people's welfare as the series goes on. Fortunately Season 3 appears to be getting progressively better. We're now eight episodes in with five good episodes - the quality ratio rises to 63 per cent.
Posted by Grant at 7:10 PM