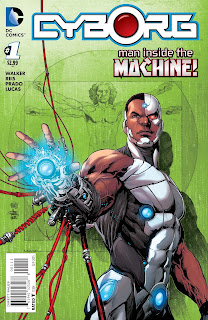 The executives at DC Comics cannot be entirely happy with the performance of Cyborg, which debuted last month with 45,187 units shipped via Diamond Distribution - unless it has a significant digital readership, of course. This new book, which comes after four years of aggressively marketing and pushing the character on readers, was widely advertised in DC's other comic books and got pretty widespread coverage in both Previews and on various comic book news websites. I had honestly expected the book to launch with at least 50,000 copies; that at least would have put it on a par with the likes of Justice League 3000 or Deathstroke. Instead it's doing around Sinestro numbers, which would suggest the book's got about a year before its sales hover around the 20,000 mark.

I'm going to honest: my impression of DC Comics at the moment is of a company in a fairly shaky downward spiral. The story momentum across the line got stopped in its tracks with the two-month Convergence event, and they're all struggling to pick up the pace. Most titles had some kind of mini-relaunch in June, post-event, and in most cases those relaunches have had a negligible effect on sales. Aquaman got a 4 per cent bump in June compared to March. In July the book dropped more than 16 per cent to post its lowest single issue sales since this particular volume began (28,158).

It's not an isolated incident either. Wonder Woman dropped 11 per cent. Detective Comics and The Flash dropped 12 per cent. Harley Quinn dropped 13 per cent. Catwoman dropped a frightening 19 per cent. For whatever reason, the bottom dropped out of the DC Comics market in July, and the it cost the company a lot of revenue. Now we need to wait until after August to see if this is a momentary aberration or a serious problem. My gut tells me it's the latter.

Then there's the sudden dramatic changes of the key characters across the line: Superman has lost most of his powers and his secret identity, Batman has been replaced by Jim Gordon in a robot suit, and the Green Lanterns seem to have been wiped from the universe. Add that two-month delay to the wide-scale changes, and you've effectively created an efficient 'jumping-off' point for thousands of readers still buying their DC books by force of habit. DC have basically done the worst possible thing they could do with a serialised narrative: they gave their readership time to step back and think.

Then there's the explosion of new titles. On the one hand I applaud DC for throwing out some very left-of-field choices for new books in June. On the other hand they seem almost entirely left-of-field. Even more traditional relaunches were re-imagined into idiosyncratic forms, either through story or artist choices. It felt like a shotgun blast when a sniper rifle was required: rather than carefully release a few likely commercial hits - a new Robin book, a Green Lantern relaunch - DC simply threw as many books as they could manage up into the air and waiting to see which ones landed on their feet.

How many did land on their feet? Not many. Before I begin analysing DC Comics' sales performance for July 2015 any further, it's important to keep in mind one number: 28 per cent. That's the average decline in sales from the first issue to the second for an ongoing DC monthly book between 2012 and 2014. So: how did DC's 21 new monthly series and miniseries fare in their second month of release?


Some of these falls are easily explained: Justice League of America's first issue was boosted artificially by variant covers, and the 150,000 odd copies sold was clearly unsustainable from the beginning. Books like Robin: Son of Batman, Batman Beyond and Harley Quinn and Power Girl launched from a higher-than-average base, where a larger-than-average drop in the second issue is therefore more likely.

Some of these falls are, quite frankly, catastrophic. Prez has already been truncated from a 12-issue series to a six-issue series. Books like All-Star Section 8, Bat-Time, Doomed and Dr Fate should arguably have never been launched in the first place. The Omega Men strikes me as the wrong book for DC marketed in the wrong way: it would probably do gangbusters for Image, and its initial hook of 'who killed Kyle Rayner' put a lot of its target market off-side before it began (for the record: his death was faked, and he's a character in the book).

It's difficult to see where DC goes from this, particularly with Marvel about to do a "New 52" relaunch across its entire range in the coming months. I think we're hitting the point where Warner Bros is going to be paying much closer attention to what their subsidiary is going, and possibly moving some senior people on from the company, and overhauling exactly which books they publish and how they publish them. These kinds of declines are going to kill the company without some pretty immediate action.

What's worrying is that of the 22 books I'd currently classify as in some kind of sales trouble, 12 of them were only launched in June. As I said, this is a company that looks to be in some real trouble going forward.

(Sales figures taken from Comichron.)
Posted by Grant at 4:58 PM