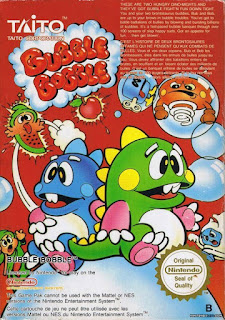 Taito released their original arcade game Bubble Bobble in 1986. It was a huge commercial hit, and was quickly ported to pretty much every home computer and console platform imaginable. Taito handled the NES port themselves, which probably explains why it felt like such a faithful and enjoyable adaptation. The game is a single-screen platformer, in which two players can simultaneously jump from platform to platform as they clear each level of monsters. They do this by shooting bubbles that can incapacitate a foe, allowing the players' characters to run into them and destroy them. There are 100 levels in all.

It's a wonderful game: fast enough to feel frantic, but no so fast that it's impossible to play. Like the best arcade games, Bubble Bobble is easy to learn how to play, but quite difficult to master. 100 levels help to make it a fairly long and entertaining game, and the two-player co-operative mechanic makes it a wonderful game to play with a friend. Most videogaming is social these days - Bubble Bobble is one of the early titles along that road.

Taito didn't rest on their laurels when it came to Bubble Bobble. A more console-friendly platformer followed, titled Rainbow Islands, and the franchise reached new heights some years later with the launch of Puzzle Bobble (aka Bust a Move). In total there have been almost 50 separate titles using the Bubble Bobble characters over the past 29 years. I have no doubt there will continue to be many more. The game also inspired its fair share of clones and copycats: of those Toaplan's Snow Bros (1990) was almost certainly the best. It received an NES adaptation of its own in 1991.
Posted by Grant at 7:39 AM