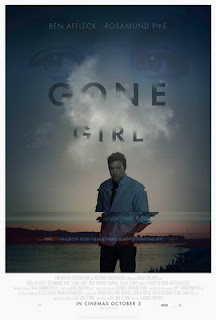 On the day of his fifth wedding anniversary, Nick Dunne (Ben Affleck) returns to his home to find his wife Amy (Rosamund Pike) missing. He contacts the police, who begin a search, and whose investigations begin to point to Nick as the perpetrator. As the story progresses, fewer and fewer details of Nick and Amy's lives are what they initially appeared to be.

That's really about as far as I can comfortably go with a synopsis before I start revealing major plot developments.

Gone Girl is a 2014 drama directed by David Fincher and written by Gillian Flynn - adapting her own bestselling 2012 novel. It's a measured, uncomfortable film that shifts its ground in relation to the characters several times. It regularly surprises, it has a deep threatening undercurrent to it, it's remarkably well shot and features outstanding performances.

So why did I find myself somehow so conflicted and ambivalent?

Taken entirely in isolation, Gone Girl is an exceptionally well constructed film. As I mentioned above, it is beautiful to look at. The cinematographer was Jordan Cronenweth, a regular collaborator with Fincher, and he's managed to make every shot look like a perfectly composed painting. It is unexpectedly beautiful for a film that is mostly people having conversations. Those images are enhanced by a haunting musical score by Trent Reznor and Atticus Ross. It's less of a score and more of a soundscape, but suits the protagonist's degenerating situation perfectly.

Ben Affleck is great. He begins as a very likeable, easy-going guy, and when his wife vanishes we feel genuinely sorry for him. Then revelations come to light, and we may hate him a little. By the end of the film we're terrified for his safety, and then we're simply sad. Affleck's performance guides the audience through these transitions incredibly well. Rosamund Pike is similarly effective as Amy, the 'gone girl' of the title. We start off seeing her in flashbacks, as more and more information is revealed about her and Nick's relationship.

Now the film does end ten minutes too late. It sails past the perfect sort of uneasy, terrifying ending and then meanders on to simply be depressing. Had the film ended when it seemed about to, it would have been a much stronger work.

Discussing the main problem of the film requires revealing the ending, so if you haven't seen Gone Girl you may wish to stop reading now and move on.

I find myself troubled by the film. On the one hand, revealing Amy to be an obsessive and paranoid sociopath is incredibly surprising and very well staged. On the other hand it plays the film directly into every nasty stereotype perpetuated by patriarchal culture. Amy is the psychotic bitch, the nagging wife, and the bunny-burner. She fakes her death to get petty revenge on her husband. She fakes a sexual assault to gain the public's sympathy. Taken entirely on its own, Gone Girl is a pretty great and tense drama. Taken within the context of the society that's watched it, and it feels more deeply unpleasant the longer it goes on.

Or does it? Amy does personify a certain kind of unpleasant and false stereotype, one held up by grotesque legions of woman-hating men's rights activists all across the Internet. On the other hand, when we first see her - alive and well and faking her own murder - she goes into a stunning extended monologue about the male expectation of women as 'the cool girl'. It's a fabulous speech, perfectly delivered, and stunningly provocative, and seems to stab the knife right into the exact sort of misogynist bubble that other aspects of the film would seem to celebrate. It drives a lot of audience identification for Amy that takes the audience with her for much of the film. And then she fakes a rape and murders someone. If you're anything like me, that's going to make you flinch back and feel highly confused. Are we supposed to hate Amy? Side with her? Feel sorry for her? Feel for her? All of the above?

More simply: is Amy simply an unpleasant stereotype, or has she been transformed into one by the society that makes those stereotypes? I honestly don't know the answer yet.

It leaves me somewhat troubled: how does one judge Gone Girl? The individual ingredients within it are pitch-perfect. The cake they're baking is kind of vile in one bite, and powerfully provocative in the next.
Posted by Grant at 8:58 PM