Blake's 7: "The Harvest of Kairos" 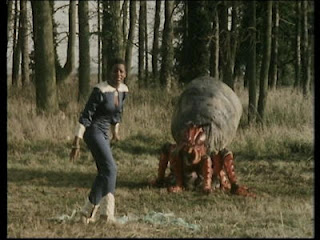 Tarrant (Steven Pacey) has planned a heist to rob the Federation of valuable kairopan crystals. At the same time Servalan (Jacqueline Pearce) impulsively nominates a sexist, blunt former labourer named Jarvik to mastermind another run at capturing the Liberator.

Okay so we're five episodes into the season and three of those five episodes have largely focused upon attempts by the Federation to capture the Liberator. Four of the five episodes have featured Servalan as a villain. I am sensing a significant lack of imagination and variety in this third season of Blake's 7. This is not the worst episode of the season so far - that's almost certainly "Volcano" - but make no mistake this is a terrible episode nonetheless.

There is one element threaded through the episode that works: the Federation harvest the valuable kairopan crystals for one week each year from the surface of the planet Kairos. Anyone who remains on the planet once that week has passed is never heard from again. The episode's revelation of the exact nature of kairopan, and what happens when people remain behind, is actually rather well developed and interesting. It's saddled with some poor production values, including an unintentionally hilarious alien monster, but given the budget with which the series had to work it hardly seems fair to criticise it.

On the other hand there's Jarvik, played by former Emmerdale Farm star Andrew Burt. He's genuinely awful to watch. He lumbers around the sets, shouting and boasting. He's an open misogynist, spouting endless nonsense about how he and Tarrant are men, and that men need to fight and be respected, and regularly refers to Servalan as 'woman'. In his first scene he does a mad little pantomime fight with two Federation troopers before kissing Servalan passionately on the lips - and without any kind of consent. There's not a single thing about the scene that works: not Jarvik, not the simulated combat, and definitely not Jacqueline Pearce's strangely stylised cry of 'Will no one obey me?', standing in the middle of the room with her arms held wide.

The script generally drags Servalan even further down the rabbit hole from character to caricature, with her later demanding that Jarvik kiss her again, and seemingly relishing his brutal, sexist antics. For two years the character was a complex political figure with an icy disposition outmanoeuvring her political opponents with panache and an insincere smile. Now she's effectively a cat on heat, purring and slinking her way through repeated attempts to capture the Liberator and hook up with men at the same time. It's tragic how poorly she's being written in this season.

The script is by newcomer Ben Steed, who will write two more episodes of the series - "Moloch" and "Power". Based on all three I can only assume he has a massive problem with women in power, since all three of his scripts seem obsessed to one degree or another with battles between the sexes.

Avon spends much of the episode ignoring the ongoing battle to mess about with a mysterious rock he has recovered from another planet. This 'sopron' clearly exists from the beginning of the episode to provide a means of winning in the climax. It's so openly transparent that it becomes dull and unsatisfying: if you can see the solution to a problem from the first five minutes, it's never really able to become an interesting problem.

Avon's personality seems slightly off: it beggars belief that he'd muck about with his sopron rock while a space battle was going on. Tarrant too suffers from weak characterisation. He was introduced as a sort of dashing, clever space captain. Then he was made into a petulant bully for a week. Now he's a bit of an idiot. Dayna also suffers somewhat from being written out of her previously established personality. Cally and Vila barely get a look-in at all.

Some nice touches and moments around the edges at least allow "The Harvest of Kairos" to be mildly interesting, which is more than "Volcano" achieved. This is such bad television though. I feel embarrassed on behalf of everyone who made it.

We're five episodes into Season 3, and only two have been good. The quality ratio drops to a worrying 40 per cent.
Posted by Grant at 8:53 AM