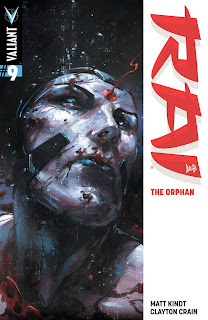 Another Valiant title, another completely different sort of style and genre. Rai follows a Japanese super-powered soldier in the Earth's future, where New Japan floats way up above the post-apocalyptic remains of the Earth. Rai was created to serve the all-powerful 'father', but when he rebelled he was replaced and hunted down. While people fight against New Japan's totalitarian government up above, Rai himself is lost somewhere on the Earth below. That's honestly all you probably need to know.

Jumping into any comic book at the ninth issue is usually a challenge, but in their typically useful fashion Valiant have provided a summary of the story so far on the first page. Matt Kindt's script is also very clear and enjoyable, so even when the finer details are a bit difficult to follow there's still plenty of material to enjoy.

Clayton Crain's painterly artwork provides an enormous enhancement to the story. It gives it all a very French feel; this issue wouldn't be out of place in a 48-page bande-dessinee in some Parisian bookstore. Certainly it's the kind of high-end, beautiful artwork that you rarely get to see in a monthly comic book. Most artists simply aren't fast enough to produce art this good on so tight a schedule.

This is a great science fiction book that is, like much of Valiant's output, getting overlooked by many comic book readers. Check it out. (4/5)

Teddy finally reaches the enclave of anomalies, hidden away from sight in their hundreds of thousands, desperately hoping that Ano is there and safe. This beautifully illustrated comic book has worked itself into being a fairly on-the-nose allegory for GLBTIQ rights, and in this issue specifically it appears to echo how marginalised subcultures have a tendency to break up from within and marginalise their own. It's a solid and enjoyable science fiction comic with a message, even if some of Pierrick Colinet's finer details are a little murkily expressed. (3/5)

The second issue of Oni's Invader Zim relaunch is not quite as effective as the first. That's possibly down to writer Eric Trueheart, whose scripts for the television series were similarly very good yet not quite as strong as Vasquez's. More old characters get a look-in, and it remains one of the funniest books on the shelves. If you're a fan of the original cartoon this is an essential purchase, and the very next best thing to have new episodes to watch. (4/5)

This new monthly title is basically IDW's previous New Animated Adventures comic being relaunched. I guess if it works for Marvel... The opening storyline sees Splinter get targeted by a villain collecting mutated animals based on the Japanese zodiac: basically an excuse for every villain and supporting character to turn up at once. It's probably very satisfying stuff for younger readers, but this particular fan of all-ages comics like his stuff a little more sophisticated. This issue's also scored a bit of a coup with a back-up strip by cult favourite Jame Kochalka. It's a weird little short story, running only a couple of pages and deliberately written and drawn in a child-like style. I'm honestly not sure what to think of it. At any rate, if you have kids or know kids and they're looking for an enjoyable comic, this one will likely fit the bill. It's not the best, but it does its job. (2/5)
Posted by Grant at 11:00 PM