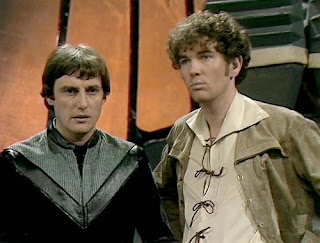 As part of her latest scheme to capture the Liberator, Servalan (Jacqueline Pearce) unleashes a deadly virus on Cally's home planet of Auron. When the Liberator rushes to Auron's aid Servalan springs her trap - while simultaneously making use of the planet's cloning facilities.

So just to keep count: we're now seven episodes into Season 3 and four of those episodes have focused, in whole or in part, on a Federation attempt to capture the Liberator. It is getting just a little tiresome. Thankfully in this particular case taking the Liberator seems a secondary concern to Servalan's use of Auron's incubation chamber. Precisely why Servalan wants to populate the universe with several dozen genetically engineered clones is never really explained. There's quite a lot in this episode that goes unexplained, actually. It's a slightly frustrating combination of good scenes and bad. There's more good than bad, to be fair, but it's still a very shaky episode.

This is the second script by Roger Parkes, who also wrote Season 2's similarly frustrating "Voice from the Past". Based on these two examples he seems to be a writer with solid ideas, but no real talent for pulling those ideas into sensible plots. You can drive trucks through the plot holes in both of them. Here there are inconsistencies all over the place: for one thing the virus Servalan unleashes on the Aurons is stated to be alien in origin, yet the elder Aurons - not born via the incubators - have an inherited immunity. Then there's the weird way in which no one is allowed inside the incubation room for fear of contamination, until the plot requires Avon, Dayna and Tarrant to be there - at which point those concerns apparently no longer matter. Auron is presented as an isolationist civilization: Cally's dissatisfaction with that policy is the reason she was exiled and wound up meeting Blake on Saurian Major. This then fails to explain how Servalan can capture and infect an Auron pilot (a briefly seen Michael Troughton) at the beginning of the episode. What was a pilot doing out in deep space if the Aurons never go anywhere off-world? It's all these weird inconsistencies that stop "Children of Auron" from being a fully enjoyable episode.

Worst of all the episode ends with a genocide, followed by a crass little joke with all of the Liberator crew laughing uproariously about whether or not Cally would like to take care of some children. It's utterly bizarre.

So what does work? For one thing it's very well directed by Andrew Morgan, with a strong sense of pace and good camera work. Morgan also subtly enhances Auron's cloning culture by casting twins among the background extras. His casting of the supporting actors is very strong as well. It's great to see Ric Young as Ginka, a treacherous and upwardly-mobile Federation officer. Young is ethnically Chinese, yet his character is in no way defined by his race. For BBC television in 1980 this was still unfortunately rare. Young does a great job with the role as well, making Ginka one of the most enjoyable Federation characters in a long while. Similarly strong is Rio Fanning as Deral, who in contrast to Ginka just seems to be a soldier doing his job.

There's some quite decent work for the regular cast as well. Cally obviously gets much to work with since it's her story and her home planet. Jan Chappel also pulls double-duty this episode, since she's also required to play Cally's twin Zelda. She gives Zelda quite a different personality and manner, befitting someone who's never left Auron or experienced the violence that Cally has. Avon seems darker than usual - now obsessed with travelling to Earth and killing a Federation torturer nicknamed "Shrinker". This particular plot thread is picked up in the following episode. Most of all it's satisfying to see a script that finds something for all five characters to do. Too many episodes in Season 1 and 2 left either Cally or Jenna up on the Liberator doing nothing - this episode gives everyone at least a brief moment to contribute, and it's a better episode for it.

Ultimately this is Servalan's episode as much as Cally's. Jacqueline Pearce is good, and it's difficult not to feel sorry for her when her cloned 'children' are destroyed. The character has definitely been misused through Season 3 so far, but here she feels a lot closer to the cold, calculating politician of earlier seasons than the flirtatious comic book villain of recent episodes. It's good to have the original version of the character back.

"Children of Auron" is not perfect by a long shot, but it definitely has enough in it to be an enjoyable hour of television. It's the fourth decent episode out of seven so far, giving Season 3 a current quality ratio of 57 per cent.
Posted by Grant at 9:33 AM