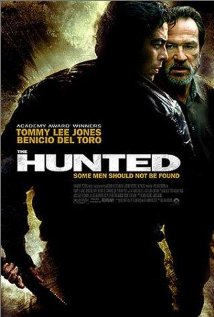 I feel there almost needs to be a sub-genre of action film based around Tommy Lee Jones looking grumpy while chasing people. Clearly he invented the genre with The Fugitive and its sequel U.S. Marshals. He grumpily chased after Ashley Judd in Double Jeopardy and he chased after Benicio Del Toro in The Hunted.

Of the four it's The Hunted that was the least successful. In Australia it didn't get a cinema release at all, instead getting shoved directly to home video. In the USA it flopped, pure and simple. It seems a shame; this is not a film classic by any stretch, but it does what it sets out to do and it achieves it in an efficient and entertaining manner.

Jones plays Bonham, a quiet tracker working in British Columbia. He gets dragged back to the USA when four deer hunters are found brutally murdered. The perpetrator is found: it's a deranged former marine named Aaron Hallam (Benicio Del Toro), who Bonham once trained in survival skills and knife fighting as part of a US army program. When Hallam then escapes custody, Bonham doggedly chases after him.

It's a pretty generic plot, and to be honest the screenplay doesn't really do anything we haven't seen many times before. Where it works is in terms of acting and direction. Tommy Lee Jones is a wonderfully understated actor, doing a lot of his character work in glances and pauses. Given his iconic Texan drawl it would be easy to assume he doesn't really act at all, which would be a mistake. He's fabulous here, playing Bonham with a quiet reluctance, as if haunted by terrible past sins. Del Toro is slightly less impressive, appearing to struggle a little with hiding his Puerto Rican accent and I wonder if that interfered a little with his performance.

The supporting cast are, to be honest, barely present in the film. An early emotional connection is made between Bonham and an FBI agent named Durrell (Connie Nielsen), but it essentially gets abandoned during the film's third act. It did make me wonder if something wound up on the cutting room floor.

The film is directed by William Friedkin, better known for his widely acclaimed bona fide hits including The French Connection and The Exorcist. While the script really doesn't give him the opportunity to produce a film to match them, he does work the hell out of what he's been given. This is proper old-fashioned filmmaking, with all fat cut from the bone and no scene included that doesn't push forward the narrative. All B-movies would kill to be this slickly directed. The climactic knife fight in particular is impressively staged, with real weight to every blow and some wince-inducing injuries.