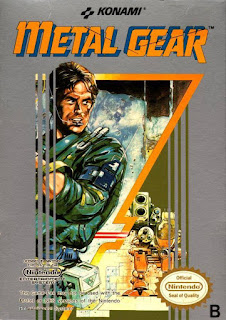 Mention Metal Gear these days and people will understandably leap to Hideo Kojima's widely celebrated - and regularly mocked - series of Metal Gear Solid games that have been a mainstay of the PlayStation since the late 1990s. Metal Gear Solid itself (reviewed here) was of course a sequel - the third in the series - and the half-forgotten Metal Gear was the first.

Kojima originally developed Metal Gear for the MSX2 home computer. It was his publisher Konami that, with his knowledge or consent, quietly passed the source code to a separate development team to have them re-develop the game for the Famicom - and, subsequently, for the NES. Due to the unapproved changes made to the storyline and the gameplay, Kojima has understandably disowned the NES iteration. Full disclosure: I've never managed to play the MSX2 original, but the NES version is pretty great.

The game puts the player in control of Solid Snake, a commando assigned to break into a military complex and take down a terrorist organisation that has stolen a robotic tank known as Metal Gear. It stands out from other action games of its period thanks to a focus on hiding and sneaking: this isn't a game to charge into with all guns blazing, and this stealth-based gameplay was some years ahead of its time. The game also has a much more comprehensive storyline than the average NES title. Sequels would push Kojima's focus on storytelling to ludicrous extremes, including 45-minute cut scenes, but here it's just a refreshing amount of additional depth.

The game's not perfect: for one thing early sequences when your character is unarmed can be maddeningly tricky to survive. It has also dated quite significantly, although that's hardly surprising for a 28 year-old videogame (the Famicom version was released in 1987, the NES version in 1988). It's an important slice of history, however, and in a countdown of the best NES games it absolutely deserves its place.

This is the 1,500th post on The Angriest. Thanks for continuing to read it.
Posted by Grant at 7:43 AM