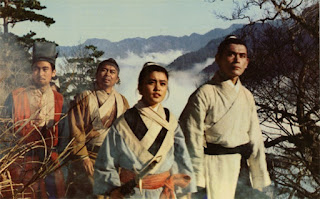 At the height of the Ming Dynasty, the emperor's eunuch Tsao (Pai Ying) has executed his political rival General Yu, and exiled Yu's children from China. He then has second thoughts and, fearing a future reprisal from the children, sends a large contingent of his secret police to assassinate them. Tsao's men wait at the isolated Dragon Gate Inn, where their arrival coincides with that of three itinerant master warriors.

Dragon Inn is a 1967 Taiwanese wuxia film directed by King Hu. It remains quite a difficult film to find on home video, although Eureka Video in the UK is thankfully releasing a bluray edition this September. For many viewers it's sadly less well known than its two remakes: New Dragon Gate Inn (1992) and Flying Swords of Dragon Gate (2011). This is a deep shame, as Dragon Inn is not only a satisfying wuxia picture in its own right but also one of the most influential films ever made in the genre. If you have ever seen a Chinese period film with a master swordswoman, a fight in a roadside tea house, or a powerful and manipulative eunuch villain, then you pretty much have Dragon Inn to thank for it.

The film is King Hu's follow-up to his hugely successful 1965 film Come Drink with Me. Following the release of Come Drink with Me, Hu had an acrimonious break-up with the Shaw Brothers studio. While production on a Come Drink with Me sequel progressed without him (Golden Swallow, reviewed here), Hu moved from Hong Kong to Taiwan, and signed up with the Union Film Company. It was with them that he directed his next picture, Dragon Inn.

It is fascinating coming to this film for the first time having already seen so many other films that were inspired or influenced by it. By comparison it's a highly mannered film, with broad and theatrical performances. King Hu was a big fan of Peking opera, and it's clearly had an influence here. Particularly interesting are the various sword fights - while they contain the flourishes and wire-assisted acrobatics one might expect from the genre, they're deliberately very stop-start affairs. Characters will strike at one another, then pause, then strike, then pause. This staccato rhythm is remarkably effective, and distinct from the more constant and fluid swordplay that goes on in later productions.

Shih Jun is remarkably good as Hsiao, the master swordsman who first invades the secret police's sting operation. He gives a very confident and likeable performance. There's quite a lot of humour to the film, including more than a few moments of quite black comedy when the incognito officers manage to get themselves killed attempting to murder Hsiao. Also very strong is Polly Kuan as Chu Huei, a young woman - also skilled in using a sword - who travels around in disguise as a man. It's genuinely surprising to see a female action hero in a film this old who's competent, taken seriously by her peers and isn't even sexualised.

It takes a little while to settle into the more old-fashioned and stylised rhythms of Dragon Inn, but once comfortable with its style it's a wonderfully entertaining movie. It's also a remarkable piece of movie-making history.
Posted by Grant at 7:36 AM