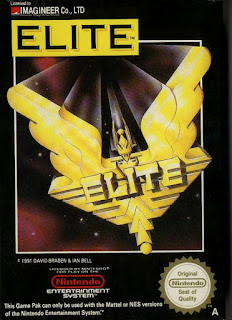 Back in 1984 Elite was a jaw-dropping achievement in computer game design. It was a science fiction flight simulator, in which the player pilot a starship from one planetary system to the next, either trading in cargo - both legal and contraband - or working as a bounty hunter. It didn't really have an end goal beyond getting one's character's fighting ability listed as "elite", and thanks to some clever coding provided a staggeringly large play area. The game was developed by Ian Bell and David Braben, originally for the BBC Micro but subsequently for the Acorn Electron, Commodore 64, Amstrad CPC, PC, ZX Spectrum and Atari ST.

A few years after that, it rather bizarrely received a port to the Nintendo Entertainment System. Published in Europe and Australia in 1991 (it never received an American release), it was the final version of the original game to hit the market. 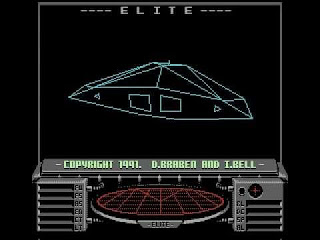 The gameplay was tweaked slightly, with a combination of buttons required to match the various keyboard commands of the home computer original. Some maddening elements of the original - like having to manually land your spacecraft until you can finally afford a docking computer - were removed. Some of the graphics were updated and refined. It was, in effect, an exercise in give-and-take. Some elements of the game, mainly the controls, were definitely substandard. Others, mainly the graphics and the docking process, were significant improvements. The end result was a game that wasn't quite as easy to handle as its home computer equivalent, but managed to be one of the most unusual and striking games available on the NES.

The game's didn't pass by Nintendo unscathed. One of the neat little touches of the original Elite was that the player could fill their cargo bay with legal goods - food, textiles, computers, whatever - or illegal ones - narcotics, slaves, and so on. This enticement to criminal activity did not wash with the notoriously conservative Nintendo, so a strange compromise was reached. Slaves were renamed to "robot slaves", apparently because an enslaved artificial intelligence was less repugnant to Nintendo than an enslaved human being. More oddly, narcotics were removed form the game entirely and replaced with 'rare species'. In the warped world of Nintendo's social standards, this was apparently a nicer thing to smuggle.

If I were to recommend Elite to somebody today I would absolutely recommend they emulate one of the original home computer versions - I personally grew up playing it obsessively on the Commodore 64. As a strange artefact of console gaming, however, the NES Elite is well worth checking out.
Posted by Grant at 7:28 AM