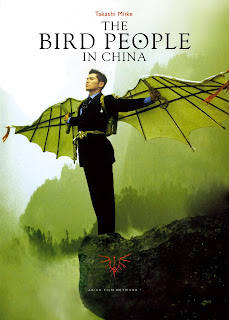 Takashi Miike is one of Japan's most versatile directors, jumping from genre to genre pretty much on a film by film basis. He seems as comfortable making a drama as he is a comedy, or a horror film, or a children's adaptation of a popular anime. He's also remarkably prolific, having directed 90 films, TV specials or video productions between 1991 and 2015. A lot of people in the English-speaking world seem to know him for his legendary 1999 thriller Audition. On one level that's great, because it's an excellent and provocative film and deserves to be seen. On another level it's disastrous, because it's let a lot of those viewers to assume his entire oeuvre is just as horrifically violent and psychologically disturbing.

Take The Bird People in China as an example: Miike directed in a year before Audition, in 1998. It's a slightly surreal drama based on a Makoto Shiina novel. It follows Wada (Masahiro Motoki), a young man sent by his employer to China's Yunnan province to assess a potential new jade mine. When he arrives in China he is apprehended by Ujiie (Renji Ishibashi), a yakuza who claims his associates are owed money by Wada's employer. Together they journey out into the Chinese wilderness in search of the mine, instead finding an isolated village with a peculiar secret.

This film is almost the antithesis of Audition. It's a slow, gentle drama, peppered with an odd sense of humour and plenty of wit. It's told against a stunning rural expanse of green fields and lush, mist-covered mountain-sides. There are no disturbed psychopaths here, and no sudden moments of extreme violence. There are simply two unlikely companions who discover a magical village in the middle of nowhere, and in exploring it come to discover themselves.

Masahiro Motoki is pretty much playing to type as an earnest, good-hearted person doing his best to keep his rising panic in check. It's a very similar character to the one he played in Sumo Do, Sumo Don't, albeit in a very different circumstance. He is perfectly cast for what the role requires, and makes for a likeable and readily identifiable protagonist.

Renji Ishibashi plays Ujiie for laughs: he is a very broadly drawn and intentionally amusing caricature of a yakuza enforcer, replete with white lined suit, colourful shirts and tattoos. With his balding hairline, thin moustache and constant sweaty appearance, he comes across as very slightly pathetic - he seems both volatile and impotent. It's Ujiie who has the more remarkable journey over the course of the film, first falling deep into mental illness before emerging as a transformed person.

The film can be seen largely as a love letter to a simpler life. The village is free of technology and modern civilization. Its people live simply and comfortably. The village also has a growing effect on Wada and Ujiie. Ujiie ultimately doesn't want to leave, and threatens violence against anyone else who might go back to Japan and let people know the village exists. The village affects Wada in more subtle ways. He begins the film recording his actions on a portable cassette recorder. When in the village he grows fascinated with a young woman's singing. He tries to record it but, after so many days out in the wilderness, his recorder's batteries wear out. He's forced to put away the technology and engage with her voice directly.

It's not a perfect film. For one thing it feels at least 15 minutes too long for the amount of story it tells. For another there's a strange tonal shift halfway through the film. The first half - basically a road movie - is broadly comedic, whereas scenes in the village take on a much more serious, meditative quality. Much of the film drags to an extent, but by the end it certainly leaves a strange impact on the viewer. It's not one of Miike's best films, but it's an interesting film nonetheless.
Posted by Grant at 8:17 AM