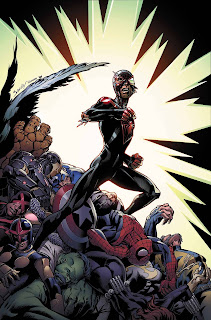 For some reason I find myself drawn to continuing with Ultimate End, the five-part miniseries that is supposed to herald the end of Marvel's Ultimate Universe. It's like hate-watching a bad TV show: I am paradoxically addicted to reading a comic because I genuinely can't fathom just how egregiously awful it is.

Here's the thing: we're through four issues of five now, and I still have not got the foggiest clue of what is going on. There are multiple versions of all of the characters running around, but little to directly show which one is which, or how they got thrown together, or what's going to happen. It's an absolute mess of confused story fragments and over-written and highly over-indulgent dialogue. It is, in my opinion, the hands-down worst thing Brian Michael Bendis has written.

Mark Bagley's artwork doesn't seem much better - it feels very rushed, and lacks the careful compositions and attractive design work that he brought to Ultimate Spider-Man.

Some might argue that Ultimate End makes more sense if one is also reading Secret Wars - which I am not reading. To that I would argue that every comic book should stand on its own. I shouldn't have to read Secret Wars. If this is the grand finale of the Ultimate Universe, then things are definitely going out with a disgracefully sloppy whimper. (1/5)

Under the cut: reviews of three much better comics that are more deserving of your money: Broken World, Darth Vader, and The Fly: Outbreak.

When an asteroid was about to crash into the Earth, Elena Marlowe was one of the unfortunate people left behind during the planetary evacuation. When the asteroid subsequently missed the planet entirely, she found herself in a new world of survivors with no plans and no rules. This third issue sees her wedged between a military compound, with plans for the future, and sustainable food and water, and a religious commune down the road where she's been tasked with assassinating a cult leader. This has been a fascinating series where each issue has curved the storyline into a fresh, unexpected direction. I've really enjoyed not knowing precisely where it's going. Christopher Peterson's artwork is clear and comparatively simple, and really gets lifted by Marissa Louise's colouring. It's a great book. (4/5)

Darth Vader's twisted road back into the Emperor's good graces continues, as he first masterminds a heist and then gets tasked with investigating the same heist. This is an unexpectedly marvellous book: you would think it would coast by purely on the popularity and iconic imagery of Darth Vader, but Kieron Gillen has developed a fabulous supporting cast and really woven disparate elements of the Star Wars universe together. Fan spin-offery, yes, but about as good and entertaining as this sort of indulgent fan-pleasing spin-offery gets. (5/5)

The Fly: Outbreak comes to its conclusion in a very high-octane, action-packed fashion, but that's kind of why it's so disappointing. Confrontations happen. People die. There's an ominous epilogue hinting at the future. The artwork by menton3 and David Stoupakis remains great, and indeed is the highlight of this whole series, but there's something about the script that feels perfunctory. Weirdly it is co-written by Denton J. Tipton, after the first four issues were all written by Brandon Seifert on his own. Behind the scenes troubles? Who can say. It's not bad, just a bit underwhelming. (2/5)