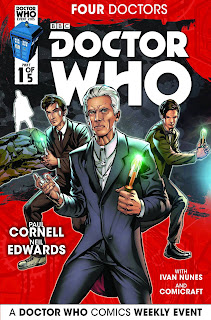 Titan Comics have been getting fairly aggressive with their schedule of Doctor Who comics. They kicked off their range with monthly titles focused on the 10th and 11th Doctors, then added a third monthly focused on the 12th. Now they're making mini-series as well: one focused on the 9th is partway through and another focused on the 8th is coming later this year. On top of all of that, this month they've launched a five-part weekly series: Doctor Who: Four Doctors.

Multi-Doctor adventures have been used as anniversary celebrations ever since 1973, and of course superhero comics have been doing big crossover event series since the mid-1980s at least. It feels fairly appropriate then, as a mid-summer event, for Titan to launch a series where the 10th through 12th Doctors have an adventure together - one apparently kicked off by the War Doctor (played by John Hurt back in 2013) during the Time War. It's written by TV series writer Paul Cornell and illustrated by Neil Edwards.

This is highly indulgent fan service of the geekiest kind, with past Doctors, the Time War, the Voord and the Daleks all thrown in good measure. It's also an excuse for Cornell to write three bickering Doctors, which fans always seem to find fairly entertaining. He's also careful to note a potential elephant in the room: the Doctor was supposed to die at the end of his 13th life, and that was Matt Smith's 11th Doctor. Finding themselves in conversation with a 14th is obviously pretty unsettling for the two younger incarnations.

It's a fast, nicely illustrated first issue that sets the series up. It's now down to next week's issue #2 to actually form a strong storyline to go with it. Anyone but the hard-core probably need not look into in, but if you read this review and knew what a Voord was, you'll probably have a lot of fun (4/5)

Under the cut: reviews of Batman, Doctor Who: The 11th Doctor and X-O Manowar.

So anyone wanting answers as to the fate of Bruce Wayne following his apparent death? This is the issue for you: lots of answers, in addition to a guest appearance by Clark Kent. As if that wasn't enough, Scott Snyder also squeezes in a fight sequence involving horned sharks and the debut of an all-new villain. Mr Bloom looks like he might be a keeper: his entrance is marvellously creepy and unexpectedly violent. We get his origin story next month before this storyline continues properly in October. I can't wait. This continues to be one of DC's strongest titles: bold, imaginative and not afraid to go right out on the ledge in terms of screwing with the Batman mythology. (5/5)

Not just one Doctor Who comic this week, but two: this is the first-year finale for the 11th Doctor. To be honest it feels a bit repetitive and unnecessary. We've gone 15 issues now with the Doctor fighting against the entity from ServeYouInc, and I've personally become rather tired of it. A silly cliffhanger from last issue is immediately (and thankfully) deflated, the villain is easily defeated, and some goodbyes are had. I really liked this comic when it started, but it's stumbled badly as it's gone on. For now I think I'm saying goodbye, and might catch up with it via collected editions some time in the future. (2/5)

A new issue, a new story arc, and thus a great new jumping-on point for new readers. Here's all you need to know: there's a guy in an alien super-suit, he rescued an alien civilization from destruction - members of whom had previously attacked Earth. Now the surviving refugees of that alien species want to join the guy on Earth - Earth's governments are not pleased. This has great scripts and characters, great artwork, and enjoyable science fiction action. This is solid, entertaining stuff. (3/5)
Posted by Grant at 7:15 AM