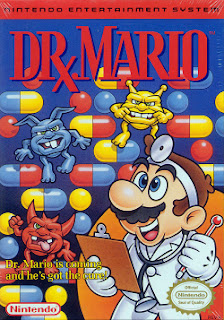 Dr Mario exists because Tetris exists. So successful was Alexei Pajitnov's addictive falling block puzzle game that by 1990 pretty much every owner of a Nintendo console also owned a copy of it. With a huge number of gamers playing Tetris, Nintendo were understandably keen for them to buy another game. So intent were they on making their own puzzle game a smash hit they branded it with their flagship game franchise, Super Mario Bros. They assigned one of their top designers, Gunpei Yokoi, to oversee its development. The resulting game, Dr Mario, is not as good as Tetris - what puzzle game is? - but it is a wonderfully enjoyable puzzle game nonetheless.

It's worth pausing to fully appreciate Gunpei Yokoi. He was one of Nintendo's key designers. He created Nintendo's hugely successful Game & Watch range of LCD videogames. He produced early NES/Famicom hits including Kid Icarus and Metroid. His most successful creation, however, was the Nintendo Game Boy. Released in 1989 it ultimately sold close to 119 million units worldwide. Yokoi's final contribution to Nintendo was the abortive Virtual Boy. This hugely unsuccessful console, which used a dedicated headset and primitive stereoscopic visuals, was pushed into release before Yokoi had finished developing it. He retired from the company shortly afterwards, before being tempted back into the industry by Bandai to develop their rival handheld, the Wonder Swan.

Yokoi died in a horrific car accident in 1997 - he was in a minor car accident on a highway, stepped out to inspect the damage and was unexpectedly hit by two other cars driving past - but he left behind a remarkable legacy for Nintendo. He described his philosophy as 'lateral thinking with withered technology': in essence, taking older and cheaper technology and exploiting it in fresh and unexpected ways to create innovative yet inexpensive games and consoles. It is Yokoi's philosophy that drove the hugely successful Nintendo Wii, which had much less sophisticated graphics than its Microsoft and Sony competitors, but used an innovative motion control system to attract a mainstream audience.

His philosophy drives Dr Mario as well. It is not a particularly original game, but it re-arranges elements of pre-existing puzzle games into a fresh and enjoyable form. It has a smooth learning curve and great replay value. It hits pretty much all three beats required for a strong puzzle game: firstly, it's addictive, secondly, it's easy to learn, and finally, it's difficult to master. It's continued to be re-released on pretty much every console Nintendo has produced since 1990. I suspect it will continue to crop up in years to come as well.
Posted by Grant at 10:08 AM