Babylon 5: "The Face of the Enemy" 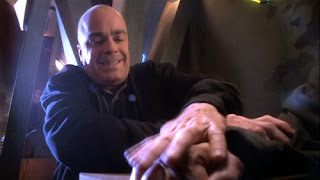 It's a busy episode. Franklin (Richard Biggs) and Lyta (Patricia Tallman) arrive on Mars to continue preparations for Sheridan's offensive. The Agamemnon joins Sheridan's fleet. Garibaldi (Jerry Doyle) lures Sheridan (Bruce Boxleitner) to Mars with news that his father has been captured by Clark's force - only to have his world turned upside down by Mr Bester (Walter Koenig).

Garibaldi's season arc hits its crisis point at this episode. Not only does he finally make his choice between serving Sheridan or serving Edgars - something which he immediately regrets - the answers behind his mysterious disappearance at the end of Season 3 are finally revealed. That alone makes this a satisfying episode, and that satisfaction only grows thanks to some slick direction and progression of a future storyline on the side.

The scene of Garibaldi betraying Sheridan in a Mars tavern - slapping a tranquiliser on his hand and handing him to a violent mob - is an awful thing to watch. Sheridan gives it his best to fight back, but it's a lost battle from the first punch. It's shot like a nightmare, full of stark blue lighting, slow motion and jump cuts. A subsequent ISN news broadcast celebrating Sheridan's safe capture is interspersed with shots of him being violent beaten inside a cell - it's all quite confronting to watch. In many respects it's all rather Biblical: Garibaldi references Judas when he agrees to trap Sheridan, and Sheridan's beatings all feel rather reminiscent of the Passion of the Christ - particularly in light of the messianic tendencies the series has given him this year.

His loyalty to Edgars demonstrated, Garibaldi is finally informed of the full plan that he has been blindly assisting for months. It's nothing surprising, since it's all been pretty bluntly foreshadowed in previous episodes: Edgars has used his pharmaceutical company to develop a virus that is deadly to human telepaths, but harmless to ordinary people. He also has a cure, creating the opportunity for either genocide or slavery, depending upon which way Earth's government wishes to go. While the revelation is unsurprising, Efrem Zimbalist Jr's delivery of the information is exceptional. His hesitation when he describes 'the telepath problem' speaks volumes.

That's two shattering scenes in a row, and it was quite a surprise to see Straczynski double-down with a third scene: Garibaldi falls into a trance, gets into a transit carriage on the Mars surface, and is then met by Mr Bester. I was particularly impressed by this scene because it is nearly entirely exposition, as Bester explains how the Shadows captured Garibaldi, how he was handed to the Psi Corps, and how Bester ordered his personality to be subtly transformed to isolate him from his fellow Babylon 5 officers, and then act as a mole for them inside Edgars' operation. The scene reminded me very much of a conversation in Oliver Stone's JFK, where Donald Sutherland explains an entire military conspiracy to Kevin Costner in one 10 minute conversation. It's pretty much the only way to get through this much information: to duck your head down, get set, and then charge through it all as fast as you can. Walter Koenig delivers it all brilliantly, making what could be a fairly boring scene into something genuinely dark and upsetting.

By the time Garibaldi returns to Edgars' compound - now fully in control of his senses for the first time in 18 episodes - Edgars and Wade are dead, and both Lise and the virus are missing. News has spread of his part in Sheridan's capture, and Ivanova has ordered Babylon 5's officers to shoot Garibaldi on sight. It's a dramatic place to leave the character, and the episode does a great job of betraying everybody's various reactions: Ivanova's rage, Garibaldi's panic and dread, Delenn's sudden waking up in the middle of the night to Lennier's reluctant confirmation of what has happened.

Elsewhere on Mars are Franklin and Lyta with a bunch of cryogenically frozen telepaths. They're clearly being put in place for a future episode, but we're another episode through and still haven't been given any clues for what purposes the telepaths are going to be used. I do prefer this approach to the blunt foreshadowing used for other plot elements, but it does come with a risk: the longer the series leaves it to reveal the purpose of bringing the telepaths to Mars and reviving them, the greater the onus becomes on giving the plot thread a satisfying pay-off.

So where are we at by the end of "The Face of the Enemy"? Garibaldi is isolated and alone - he's betrayed one master and the other is dead. The Psi Corps appear to be in possession of a killer virus. Sheridan is beaten and alone in a cell somewhere. Ivanova leads the rebel fleet, which is continuing its charge towards Earth.

This is a really good episode. When I first watched Babylon 5 I rage-quit the series at "Into the Fire", and enough people told me the series went rapidly downhill afterwards that I didn't bother to continue. Now that I'm finally watching these episodes, albeit 18 years late, I feel those people were wrong. There's been so great stuff in the second half of Season 4 - actually it's generally stronger stuff than what we were getting when the Shadow War was still playing out. We're 17 episodes into the season, and 11 of them have been good: the quality ratio bumps up a little to 65 per cent.
Posted by Grant at 7:30 AM