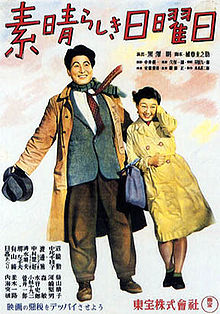 Yuzo (Isao Numasaki) and Masako (Chieko Nakakita) meet in Tokyo one Sunday morning for a date. They have only 35 yen between them. Over the course of a single day they face numerous challenges as they wander the streets of post-war Tokyo.

One Wonderful Sunday is Akira Kurosawa's sixth feature film as director, and marks another sharp change in style. His previous film, No Regrets For Our Youth (1946), was a serious melodrama set over a period of years. One Wonderful Sunday is a much brighter picture. It is still at its heart a drama, but it's filled with brightness and humour and takes place over the course of a single day.

It's a highly episodic affair, as Yuzo and Masako bum around Tokyo looking for inexpensive - or preferably free - things to do. They browse through a display home, play baseball with a group of children, go to the zoo, try and fail to buy cheap tickets for a symphony concert, attempt to meet up with one of Yuzo's war buddies, have a quiet cup of tea, and take a stroll through the park. They also struggle with self-doubt, get treated like second-class citizens by more monied Tokyo residents, also break off their engagement, and generally get depressed about life in the ruins of the Pacific War.

Kurosawa basically see-saws the film between two genres. In one, which seems highly influenced by pre-war American movie comedy, there's a series of comical situations. Yuzo tries to meet with a friend with whom he served during the war, now a cabaret manager, only to be confused for a homeless man by the staff and sent to the kitchens for a free meal. He plays a game of baseball with a group of children and accidentally smacks a ball right through a bakery sign.

Then there's the second genre, where the crushing poverty pressing down on the couple nearly forces them to break. When they try to buy tickets to a symphony, scalpers ahead of them buy all of the tickets from the box office and then start hawking them to the queue at inflated prices. When Yuzo stands up to them, he's beaten up and left lying on the ground by the scalpers - not a single person passing by stops to break up the assault or help him to his feet. Yuzo subsequently goes home to his one-room apartment and tries to convince Masako to leave him: they're never going to make ends meet, nor afford to marry and find a home together.

A film that focuses so exclusively on two characters in conversation is going to rise and fall based on the quality of its actors. When preparing One Wonderful Sunday Kurosawa was struggling with a recent mass defection of talent from Toho Studios to a newly launched competitor (New Toho) that offered its actors more money and better conditions. Forced to look for fresh talent he lucked out with Isao Numasaki and Chieko  Nakakita. Nakakita is a delight: she's warm and optimistic, but plays the part with an undercurrent of sadness. We're constantly reminded that in many respects her happiness and positive attitude is a brittle thing, and poverty has left a lot of cracks across the surface. Numasaki works with a character who's much more varied: Yuzo is quick to be negative, and regularly gives up on even attempting to make a nice day out of his date. When he does try to make things better, Numasaki does a great job making that transition from miserable to happy believable and gradual. Both actors present likeable, three-dimensional characters, and they benefit from a script that gives them a hell of a lot with which to work.

The film's most striking scene is its climax. In an abandoned amphitheatre, Yuzo tries to cheer Masako up by pretending to conduct an orchestra - the same orchestra they were unable to secure tickets to see. He tries to play-act the concert and fails. His day has finally broken him. In desperation Masako breaks the fourth wall and begs the audience to applaud him. The attempt at audience participation apparently failed in Japan, where audiences simply stared on in silence and mild confusion. According to Kurosawa, international audiences - particularly in Paris - were much quicker to clap their hands to motivate Yuzo to keep trying. While Kurosawa did not experiment with direct address again, it remains a remarkable moment.

One Wonderful Sunday is a beautiful and quite heartbreaking depiction of its time. The film was mostly shot on location in Tokyo, and you can still see the odd ruined building in the background. In contrast to his earlier films, everything - costumes, sets, and so on - is aggressively Westernised. People wear American clothes. They queue to see European symphonies. Shop signs are almost entirely written in English. There's a sense throughout the film that the old Japan has been ruined, replaced by the culture of invaders. Yuzo complains several times about how those embracing the black market are flourishing while 'honest people' are struggling to make ends meet. While No Regrets For Our Youth was a savage indictment of Japanese militarism, One Wonderful Sunday feels as if it's mourning the losses that militarism caused. It's a lovely film.

Critics of the time appeared to agree. In 1948 the film was awarded both Best Screenplay (by Kurosawa and childhood friend Keinosuke Uekusa) and Best Director at Japan's Mainichi Film Awards.

In my review series on Akira Kurosawa I have skipped over Those Who Make Tomorrow, a 1946 labour union film co-directed by Kurosawa with Hideo Sekigawa and Kajiro Yamamoto. It was shot against his wishes over a week, was never re-released in Japan and never released in any form overseas. Kurosawa did not consider it one of his films, and so neither shall I.