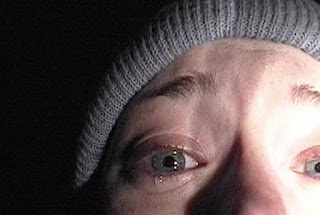 The most recent episode of Doctor Who utilised a 'found footage' technique: that is, the episode was shot entirely from a subjective point of view using helmet-mounted and surveillance cameras. As I noted when reviewing the episode, the found footage style was pretty much invented with the 1980 horror film Cannibal Holocaust and has been a predominantly horror-based form of cinema ever since. There have been some notable exceptions, of course, with comedies, thrillers and science fiction films also using the technique.

I've always liked found footage. It gives films an immediacy and a wonderful sense of tension. You can only see and hear what the characters see and hear. It places you firmly at the centre of the action and removes the opportunity for filmmakers to expand the world view or show what characters are doing in other places. With this form of cinema in mind, I had a think about the most effective movies with found footage are. Here's a list of five that I particularly enjoy - not necessarily the best ever made, but simply personal favourites I'd recommend to anybody interested in trying found footage movies out.

This 1999 horror film was an unexpected breakout hit, and remains one of the world's most profitable films. Director Eduardo Sanchez and Daniel Myrick basically threw their three cast members into the woods armed with a handycam and then spent several days scaring the bejesus out of them. What's particularly impressive about Blair Witch is just how much effective horror they managed to generate out of basically running around in the dark making howling noises at some increasingly manic actors. A sequel followed in 2000, but with a different director and a much more conventional narrative style. Despite some good elements, it was a pretty awful follow-up.

This 2012 science fiction film basically blends the found footage technique with the increasingly popular superhero genre. Three friends find a strange cave in the middle of nowhere. Something in that cave affects each of them, and they begin to exhibit psychic powers. The film boasts much more extensive production values and special effects than you'd normally see in this kind of film, and its climax owes quite a lot to Katsuhiro Otomo's Akira in terms of how it looks. A lengthier review of Chronicle is here.

If Chronicle stands out due to its innovative visual effects, then Cloverfield stands out for its sheer scale and production values. This is the biggest-budgeted found footage movie ever made, telling the story of a Godzilla-style giant monster rampage through New York from the point of view of four terrified twenty-somethings with a video camera. It's beautifully shot with some brilliant jump-out-of-your-seat scares. It also sneaks in some genuinely clever bits of back story in right where half the audience might miss them.

Interview with the Assassin

This 2002 thriller came and went with little fanfare or attention, which is a shame: it's one of the best found footage movies I've ever seen. An unemployed TV news cameraman is looking for some way to get back into the business when an unexpectedly opportunity appears to drop in his lap. His next door neighbour, a cantankerous and paranoid old man, suddenly admits that he's the man from 'the grassy knoll' who assassinated President Kennedy. As the film progresses, the hapless cameraman begins to fear that he may have entered into something much more dangerous than he had first assumed. Neil Burger went on to direct bigger films like The Illusionist and Divergent, but I think this is still his best film.

Arguably the best value of the film films, V/H/S presents five short horror films all united by their use of the found footage technique, and all combined together by a sixth over-arching film. Pretty much all of the films work exceptionally well, and cross a range of horror sub-genres. The film also works as a pretty effective sampler of 21st century American horror cinema, since its directors - notably Adam Wingard and Ti West - have by-and-large continued onto bigger and better things. The film was followed by two sequels that attempted to copy the formula, with pretty mixed results. A more extensive review of V/H/S is here.
Posted by Grant at 7:24 AM