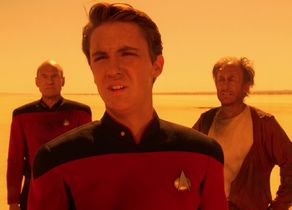 Wesley Crusher (Wil Wheaton) has finally received an invitation to enrol at Starfleet Academy. As a parting gesture Captain Picard (Patrick Stewart) invites him on a final mission to help negotiate a mining dispute in the Pentarus system. When their shuttle crash-lands en route onto a desolate moon, their mission of negotiation instead becomes a fight for survival. Meanwhile the Enterprise travels to aid the planet Gamelan V when a radioactive waste barge enters their orbit.

"Final Mission" is, as the title neatly suggests, Wesley Crusher's final adventure as a regular member of the Next Generation cast. He does return to the series for three guest appearances in Seasons 5 and 7, but this is effectively the character's swansong. I'm sure many fans, who bore a dislike for the character that bordered on the irrational, were overjoyed to see him leave. I was actually rather sad: he was and remains one of the series' most underrated and poorly utilised characters. We could have had so much more had the writers respected the character and the actor a little better.

Here's the thing: Wil Wheaton was (and, I presume, still is) a sensational actor. Prior to The Next Generation his turn as Gordie Lachance in Stand by Me was one of the best child performances in years. He was clearly capable of playing a much more interesting character than the one he was given when he joined the Next Generation cast. The problem was that the writers hired for the series either didn't know how to write for a teenage prodigy on the Enterprise, or - and this is my suspicion - actively loathed writing for the character. Over the three and a half season that he was a regular Wesley did occasionally get some decent storylines and dialogue, but more often than not he was handed trite stories about his science experiments threatening the Enterprise. By low-balling the character the Next Generation writers room threw away one of its most valuable assets. Their loss, but I do feel very sorry for Wheaton - who pretty much got forced into career suicide playing such an easily mocked character. (And that's putting aside an executive producer that refused to give him time off to accept feature film roles on the grounds he was needed for episodes, and then deliberately not including him in those episodes.)

Thankfully for his last episode as part of the Enterprise crew Wesley gets a pretty decent stand-off. The set-up is pretty simple. Their shuttle crashes on a desert planet, and after trekking to the shelter of a nearby cave system Wesley, Picard and their Pentaran pilot Dirgo find a much-needed source of water. The only problem is that the fountain is protected by a force field and an energy-based lethal defence mechanism. Dirgo is killed outright. Picard is badly injured, and Wesley needs to use his scientific knowledge to outwit the defences and save his captain's life.

That's all an excuse, really. The core of the episode is contriving a life-or-death situation where Wesley can simply sit down and admit to Picard how much he means to him, how much Wesley wants him to be proud of his achievements, and how in his late father's absence it's Picard who is the best replacement he has. It's a beautiful wrap-up for the characters, showing genuine warmth and mutual affection.  Wheaton does a great job with it, particular since for the crucial scenes he's basically talking to Picard's unconscious body.

Visually speaking it's a bit of an odd one. The exterior scenes in the desert look phenomenal: well shot, with a strong use of light and colour. It really feels intolerable hot, and it helps sell the idea of just how exhausted and dehydrated the survivors must be. Once inside the cave, the production values appear to drop considerably. The fountain - which is never explained - looks oddly unrealistic and cheap.

The episode's B-plot, in which the Enterprise tows a hazardous waste barge off towards a sun for disposal, is neither here nor there. It exists to take up screen time and to give the bulk of the regular cast something to do. It's a shame, really: I'd really have preferred that time be taken up by further conversation between Picard and Wesley. It's one of that growing number of episodes where the relatively inflexible narrative format gets in the way of better storytelling.

So it's farewell to Wesley for the time being, until he briefly returns in Season 5's "The Game". While the character may have suffered a number of indignities over his tenure, at least he's going out on a strong note. We're nine episodes into Season 4, and seven of them have been good. The quality ratio rises to 78 per cent.
Posted by Grant at 5:10 PM