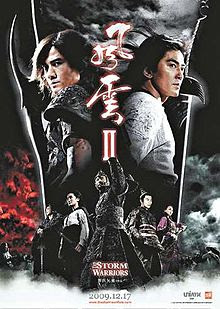 The Storm Riders was a 1998 wuxia film directed by Andrew Lau. It was based on the hugely popular Hong Kong comic book Fung Wan by Ma Wing-shing, starred popular movie stars Aaron Kwok and Ekin Cheng and made then-ground breaking use of computer graphics to recreate the comic's thrilling fantasy elements. It was a rare Hong Kong film that actually found an international audience, and audiences back home eagerly awaited the arrival of a sequel.

I'm not sure anybody was initially expecting a sequel to take 11 years, but in 2009 a second Fung Wan film did hit the cinemas. It was the work of a different production company, had new directors Danny and Oxide Pang, but did manage to reunite Aaron Kwok and Ekin Cheng as the overly dramatic super-warriors Cloud and Wind.

A synopsis of the film feels a bit superfluous: it's a story about the evil Japanese general Lord Godless invading China, and Wind and Cloud teaming up with other sword-wielding warriors Ghostly Tiger, Nameless and Second Dream to defeat him. Wind turns evil, forcing Cloud to fight against him for the future of the nation.

To be honest, the storyline is close to impossible to completely follow. I have probably misrepresented it. Characters are introduced with frustrating rapidity, and everything seems to have the same level of hyperbole and histrionic drama. For the regular readers of the comic it's probably a rather welcome showcase of their favourite characters. For the viewer unfamiliar with all of the individual plot points and protagonists, struggling to recall who was who and what was going on in the original Storm Riders more than a decade earlier, it's honestly a bit of a chore. It also ends rather abruptly, as if a second sequel was expected. One hasn't eventuated yet, and it's been six years.

While the previous film broke new ground in terms of computer-generated effects, the sequel pushes Hong Kong cinema forward in terms of green screen and digital sets. The film is filled with CGI-enhanced locations and backdrops, giving the whole enterprise a high degree of artificiality. As an adaptation of a comic it's pretty spot on. As a live-action feature in its own right it's a little more difficult to accept. There is a certain entertainment to be had in the hyper-stylised aesthetic of the film - much as there was in Zack Snyder's 300 - but as with that comic adaptation it seems to also work as a distancing mechanism. Nothing feels particularly real, and therefore little feels as if it matters. The action is so ridiculously exaggerated with digital enhancements that it just can't be taken seriously. The cast perform their roles with dogged gravitas, but it's all just sound and fury.