Babylon 5: "Secrets of the Soul" 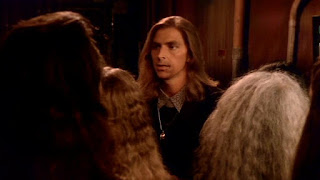 As more rogue telepaths flock to Babylon 5, tensions begin to flare up between them and the people living in Down Below. Dr Franklin (Richard Biggs) begins cataloguing the various diseases and viruses that might threaten the Interstellar Alliance, only to uncover one race's terrible secret.

Franklin's medical research seems a little unlikely the moment you pause to think about it. How many different intelligent species go to and from Babylon 5? How many different species would need to be analysed, interviewed, examined and scanned? More importantly, shouldn't much of this information be available already? It seems more of a job for a clever team of desktop researchers liaising with all of the galaxy's governments, rather than a task for a single medical chief on a space station.

The research takes Franklin to the secretive Hyach. They hand over their genetic information with a great deal of secrecy and paranoia, and it doesn't take him long to find out why: 800 years earlier they committed genocide on a sister species. Now their species is slowly dying out through a lack of genetic diversity. Franklin is disgusted, and refuses to help them find a way to stop their decline. That seems terribly out of character to me - not to mention unethical. Franklin actively blames the Hyach ambassador for the genocide, even though it happen eight centuries ago. It's like refusing to treat a pandemic in France because of the massacre of the Cathars in the 13th century. It also defies Franklin's Hippocratic oath: they're in medical need and he's obliged to assist.

It feels as if J. Michael Straczynski was aiming for something horrific with this story arc, somewhat akin to what David Gerrold did all the way back in Season 1 with "Believers". Unfortunately it hits the same problem: the situation presented, while tremendously sad and unfortunate, isn't actually as horrible as the script writer wants it to be. It relates to a horrific act, certainly, but one that dates back more than ten lifetimes ago. All it manages to achieve is to make Franklin look unfairly judgemental and pretty unprofessional.

Elsewhere in the episode tensions continue to rise over Byron's telepath colony. The colony really is deeply creepy and unsettling, and at this stage I'm still not sure if that's intentional. They sit around in dimly lit rooms singing songs. They constantly hug each other. When Byron and Lyta have sex, the entire community sits around watching them do it. They're presented and performed as a cult, and I have to be honest: if I was on Babylon 5 and a large cult whose members could read my mind and telekinetically move solid objects around the place turned up on my doorstep, I'd be begging the station command to get them the hell out of there too.

Certainly Lyta seems to be falling in with them as if they're a cult. She launches into a tirade at Zack Allen (Jeff Conaway) about all of the ways in which the non-telepaths around her have let her down, exploited her and abandoned her. She's clearly very vulnerable, and that would make her a perfect target for a cult leader like Byron (Robin Atkin Downes).

Speaking of Byron, he's still not very enjoyable to watch. He's presented and performed as a sort of seedy space Jesus, clearly influencing dozens of people to his cause but not actually demonstrating any sort of visible behaviour that would convince me that he'd influence anybody. I know I keep criticising Downes' performance every time he turns up in an episode, but he's turning up in nearly every episode. The character simply isn't working, yet the drawn-out storyline regarding him and his colony keeps forcing him back into frame.

The episode's climax - in which Byron learns that the Vorlons created all telepaths - lacks any sort of dramatic punch. For the audience it's old news, and his insistence that the other worlds all now owe the telepaths a planet of their own makes little sense. That said, I kind of want him to receive a planet. Then he can leave the station and not be in the series any more.

Seven episodes into Season 5, and four have been good. This was not one of them. The quality ratio drops to 57 per cent.
Posted by Grant at 9:35 AM