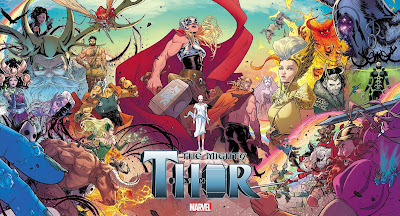 Marvel sure does love relaunches. It used to be a sign of a failing book. Then it became a publicity stunt: cancel a popular book, renumber it, launch it all over again and get a huge sales boost. Those kinds of boosts can be addictive if you're in a declining market, so I suppose one can't fully blame Marvel for relaunching books over and over again.

Take The Mighty Thor, launched this past week with an all-new extra-length (and extra-cost) first issue. It's written by Jason Aaron with art by Russell Dauterman, who were also the writer and artist of the recently cancelled Thor. What's more, it features not Thor Odinson but his former love interest Dr Jane Foster, who now wields the magic hammer Mjolnir and transforms into a female Thor when the need arises. To his credit Aaron writes a pretty easy-to-understand first issue, but it still feels like we're jumping into the middle of the story. The number on the cover might promise a first chapter, but it's really more like a ninth chapter. This is pretty much where issue re-numberings are with Marvel. They're now so commonplace that they don't have meaning any more. They're just a cheap sales stunt. They're so lazy that they don't even act as proper jumping-on points for new readers.

Now The Mighty Thor #1 is pretty great. It's got wonderful artwork by Dauterman and a script by Aaron that's brimming with character. Let's not fall for cheap tricks, however: this is issue #9, not issue #1. (4/5)

Under the cut: reviews of Action Comics, Ms Marvel and Rat Queens.

Superman continues to hunt down the villain named Wrath, even though the new powers he's using are drawing him closer and closer into doing her bidding. This issue has more art by Scott Kolins, which isn't bad but also isn't particularly attractive. It's also a fairly generic storyline, neither telling anything gripping and original nor awful and tedious. The whole issue is pretty much in the middle and by the numbers. Fair enough I suppose, but I know Pak in particular is capable of so much more. (2/5)

As with The Mighty Thor, it's worth noting this isn't a proper relaunch so much as another issue of the same comic by the same creative team, telling the exact same kind of story, just with a number one on the front instead of the number 20. Thankfully it's still a pretty great story, albeit one that begins without explanation of Kamala Khan now being a member of the Avengers. That feels like a bit of a jump to me, but we'll see how it goes. As for the rest of the issue, it continues Wilson's blend of superhero action and perfectly pitched teen angst. It has such a likeable protagonist, and both Miyazawa and Alphona give her such an expressive appearance. The bottom line is that, regardless of the stupid non-relaunches being made by Marvel at the editorial level, this is still the sensational comic book it's always been. I'm relieved. I'd also be very happy to see the giant cyborg frog make a return appearance. (5/5)

The Queens finally hit Mage University, which means unexpected reunions, crazy magic, wizard politics, bizarre street markets and hangovers. Script-wise it's all business as usual, with Weibe providing plenty of character drama, plot development and particularly humour. Art-wise I find myself not quite gelling with Tess Fowler's artwork in the same way I responded to Roc Upchurch or Stjepan Sejic. It's not bad art, but it lacks the particularly beautiful tone of either of those artists. It's still a great book, but it feels very slightly diminished. (3/5)
Posted by Grant at 11:33 PM