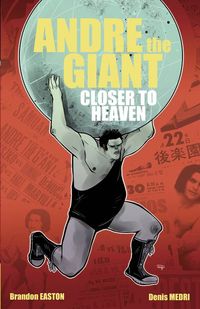 Andre the Giant was a legend of 1980s pop culture, whether you knew him from his performance as Fezzik in The Princess Bride or as one of the most popular stars of the World Wrestling Federation. Born Andre Roussimoff, he grew up in rural France before shooting to fame as a touring wrestler: first in France, then Japan and ultimately in the USA. He has a fascinating, and often-times quite sad life story, and it's ripe for adaptation. IDW clearly felt so, since this week they're publishing a graphic novel about his life: Andre the Giant: Closer to Heaven, by Brandon Easton and Denis Medri.

Weirdly this is the second Andre the Giant comic book biography in two years. Last year the acclaimed independent writer/artist Box Brown released his own very popular take, Andre the Giant: Life and Legend. It's kind of odd to see another attempt turn up so soon - I can only assume they were simultaneously developed without either book's creators knowing of the other. It does unfortunately put this new volume in an uncomfortable place: does the market need another Andre book so soon?

Easton's script is heavily reliant on narration, and that gives the book a slightly passive feel. There's also a sense of being told of one live event after another, without any strong narrative drive to help sculpt it into a readable story. Denis Medri's artwork is fantastic, however, with great likenesses of Andre as well as a host of other famous faces.

Sadly this book isn't anywhere close to being a 'must-read', and I don't think it manages to transcend it's subject matter: if you're not already a fan of professional wrestling or Andre I'm not sure there's enough here to make it worth your while. It is a nice enough package for the pre-existing fan, however, so if this sounds like your kind of book it's definitely worth checking it out. (3/5)

Under the cut: reviews of Godzilla in Hell, Star Trek/Green Lantern and Tet.

Godzilla in Hell has been one of the weirdest licensed comics I have ever read. Each issue has had a different writer and artist - usually the same person - and has followed Godzilla's journey through layer after layer of Hell. Obviously being a giant monster there's been little need for dialogue, making each issue a showcase for its particular artist. This issue, by Dave Wachter, is one of the best the book has had. He has delivered some striking imagery and beautiful artwork. If there's a criticism of the series it's been that each issue has been relatively slight, with few panels per page and not a lot of plot. This really isn't a comic you buy for the plot though: it's really all about how cool Godzilla looks in each frame. (4/5)

Conceptually a crossover between Star Trek and Green Lantern has a lot of potential: both science fiction series, both intergalactic adventure, both packed with all manner of alien civilizations. In practice this series has been overloaded with continuity references from both franchises. It's made "The Spectrum War" an unnecessarily busy and creatively muddy series. It's less of a story than a collection of guest appearances and information dumps. I liked the idea, but I hate the character cameos and the extensive use of the whole spectrum of ring-bearing groups. Angel Hernandez's artwork is excellent, but it's aiding a very weak script. (2/5)

A former US soldier and a Vietnamese detective reunite years after the Vietnam War in order to solve a murder they never managed to investigate before the Tet Offensive interrupted their efforts. This has been an excellent blend of historical character piece, detective story and Vietnam War comic, with a storyline that brings with it multiple surprises and unexpected turns. It's a really satisfying read. Paul Tucker's artwork is nicely grounded and evocative - it's art with some real emotion behind it. Earlier issues introduced me to the war and detective parts - I wasn't expecting such a human story in there as well. (4/5)
Posted by Grant at 6:17 PM