Star Trek: The Next Generation: "Family" 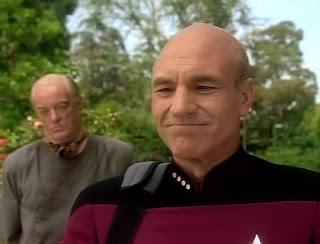 It's 1 October 1990 and time for more Star Trek: The Next Generation.

While the Enterprise undergoes repairs following the Borg incident, Picard (Patrick Stewart) makes a long overdue visit to France to visit his brother Robert (Jeremy Kemp). Worf (Michael Dorn) shows his adoptive parents around the ship, while Wesley (Wil Wheaton) receives a holographic recording made by his dead father.

"Family" is a truly ground-breaking moment in Star Trek. The preceding two-parter, "The Best of Both Worlds", were written on the fly: Michael Piller wrote the first part without having a clue how its cliffhanger would be resolved in the second. By the time the second part had been written, it became clear that something absolutely traumatic had been done to Jean-Luc Picard. The character had been assaulted and violated in the most horrifying fashion. He had been forced against his will to murder 11,000 Starfleet officers in a devastating massacre at Wolf 359. Simply moving ahead as if nothing had happened didn't just seem unreasonable, but actively offensive. As a result the writer's room went to war with the producers to get the right to address these issues in another episode. "Family" is, for all intents and purposes, the third part of "The Best of Both Worlds".

It's a striking episode, because for once it doesn't contain any real science fiction-based storyline. Instead all three plots follow ideas of family and loss. For Picard it's all about loss of control and guilt over his actions, alongside long-held tensions with his brother Robert. For Wesley it's about the loss of his father, and making a final connection he'd not previously been able to make. For Worf it's about resolving his love for his human parents with the shame of his Klingon discommendation. It's commendable that the series would devote a whole episode to characters and not technobabble, and the result is an immensely worthy exercise.

Let's be honest: the standard A-plot/B-plot dynamic of American television drama pretty much dictated that multiple storylines needed to be included. The truth is that Worf's storyline here is relatively minor, albeit gently amusing, and Wesley's is a bare skeleton of a plot with little screen time. (Poor Wil Wheaton, screwed over again.) The vast bulk of the episode is focused on Picard's recovery in France, and it's an outstanding series of scenes.

Star Trek has always been a series of allegories, using science fiction trappings to tell stories about race relations, abortion, the cold war, and all manner of other contemporary social issues. In this tradition Ronald D. Moore's script may ostensibly follow Picard's recovery from being captured by the Borg, but it's really an exploration of the effects of rape. Picard has been violated, and for most of the episode he stiffly tries to carry on as if nothing serious has happened. He fights with his constantly resentful brother. He seriously considers quitting Starfleet to join an undersea engineering project on Earth. He doggedly avoids the real issue until the episode's climax, when there's literally no escape left for him and he spontaneously bursts into tears.

To me that's remarkable. I'm not sure there's been another scene quite like it in science fiction television. There certainly can't be many, at any rate. It's a moment of absolute vulnerability, experienced by a character who has for three years been effectively defined by his buttoned-down, carefully composed persona. Patrick Stewart plays the scene beautifully, as does Jeremy Kemp - who plays Robert Picard like a patient older brother who's been wisely waiting for it to happen on its own accord. It's a moment that the series required to move on: something absolutely appalling happened to Picard, and now he's free to grieve and - eventually - move on. Note the significant way that Picard arrives home in civilian clothes, but returns to the Enterprise in uniform.

Most importantly, a final coda shows a silent Picard staring out of an Enterprise window. It signifies that his recovery is not complete. It may never be complete (certainly he's still clearly suffering from PTSD over the incident eight years later in Star Trek: First Contact). What's important is that he's acknowledged the trauma, and can begin to deal with it.

This is one of my all-time favourite Star Trek episodes, because it's all about characters and it shows tremendous restraint by refusing to shoe-horn in some lame science fiction B-plot. It also shows remarkable awareness of the series' characters, and opens a door for more ongoing character arcs in the future. We're two episodes into Season 4, and both episodes have been not just good but great. The quality ratio is 100 per cent.

There are a few firsts for The Next Generation buried in this episode. It's the first episode in which no scenes take place on the Enterprise bridge, the first not to feature Commander Data (Brent Spiner), and the first in which transporter chief O'Brien gets both a rank (chief petty officer) and a full name (Miles Edward O'Brien).
Posted by Grant at 10:14 AM