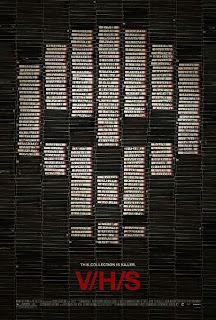 A gang of violent young men break into a deserted two-story house on a mission to recover a video cassette. Inside they find a corpse sitting in front of a rack of television screens, surrounded by dozens of tapes. While some members of the gang hunt through the basement to find the tape they need, other members begin to watch the tapes that are upstairs - with disturbing results.

V/H/S is essentially a collection of short horror films, or - to take advantage of my university screen studies lessons - a 'portmanteau' film. Wedged into the broader narrative are five short films viewed on videotapes by the main characters. The entire film - both the shorts and the framing story - are produced and presented as 'found footage'. So if you're the sort of viewer who hated The Blair Witch Project or found that Cloverfield gave you headaches, then V/H/S is definitely not the film for you.

If, on the other hand, you're looking for an inventive, clever and startling independent horror movie, then you should absolutely hunt this one down and have a watch. It is genuinely impressive.

Each section of the film presents a different short horror story, and each is directed by a different person. Let's briefly look at each film in turn.

"Amateur Night" is directed by David Bruckner and follows three actively unlikeable young men as they attempt to pick up some women at a bar and then secretly videotape them having sex. Things, understandably given this is a horror film, go terribly wrong for them. This is quite an uncomfortable short due to its subject matter, although it does fit into a traditional horror movie trope of appalling behaviour being punished by supernatural means. Hannah Fierman is particularly strong as the mysterious girl Lily, one of the two women picked up by the men.

"Second Honeymoon" is directed by Ti West, who also directed The Innkeepers - about which I wrote a few days ago. It follows a married couple on a holiday in the American West, during which time they are progressively and frighteningly stalked by a mysterious woman. There is a great sense of naturalism to this piece, which unlike the rest of V/H/S eschews the supernatural in favour of more down-to-earth shocks.

"Tuesday the 17th" by Glenn McQuaid is probably the weakest of the five shorts in terms of writing, but it boasts an exceptional visual effect for its antagonist - a weird, elusive figure that corrupts the picture of any video trying to record it.

"The Sick Thing That Happened to Emily When She Was Younger" is directed by Joe Swanberg. It is told via video chat on a pair of laptops, which is a very inventive use of the video format and one that Swanberg exploits masterfully. This is a great short, echoing Paranormal Activity to an extent but arriving at a very different sort of conclusion. It's a great example on how it's possible to generate effective horror with the lowest of budgets, and is very possibly my favourite short in the entire film.

"10/31/98", directed by a four-person team named Radio Silence, features four young men out to a Halloween party who accidentally - and disastrously - turn up at the wrong house. This is a great showcase for visual effects and nightmarish imagery. Its greatest strength - and indeed one that it shares with a lot of V/H/S - is that it doesn't waste time attempting to explain what's going on. It gets in, scares the pants off the viewer, and then gets out with a minimum of fuss.

Adam Wingard directs the framing narrative of the film, which features a bunch of nicely subtle scares all on its own. At first it's a little difficult to engage with, as the characters he presents us with are actively unlikeable, but once they reach the house the disturbing atmosphere settles in and it becomes an excruciating wait between shorts to find out what the hell is going on there.

V/H/S is a wonderfully inventive and edgy horror movie that pushes the genre forward a little rather than relying on tried-and-tested plots and styles. A sequel has already been produced, which I am keen to see - while there's great potential to extend this format, there is always a risk that comes with returning multiple times to the creative well.
Posted by Grant at 9:55 AM