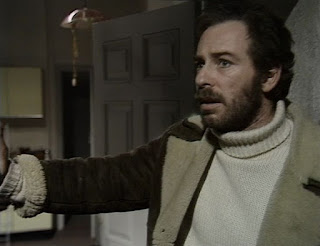 It's 7 May 1975 and time for the fourth episode of Survivors.

Abby (Carolyn Seymour) remains intent on looking for her son. On the way to her old house she, Jenny (Lucy Fleming) and Greg (Ian McCullough) meet Charles (Denis Lill), an idealistic survivor attempting to build a permanent community at a nearby farmhouse. With the potential for a proper home and base of operations, Abby is sorely tempted to join Charles' growing village - but is it too good to be true?

Well of course it's too good to be true. We may only be four episodes into the series, but if there's anything the first three have taught us it's that Survivors is a bleak and uncompromising experience. It has a remarkable penchant for dangling hope in front of its three protagonists - only to snatch that hope away and leaving them back where they started. To its credit "Corn Dolly" sustains the hope for a lot longer than I had expected, making it an increasingly uneasy case of trying to work out not if something awful is going to happen but rather what form the awful turn towards despair the episode will take.

The tragic revelation comes about halfway through the episode: Charles brings our protagonists to his farmhouse community, along with his girlfriend Lorraine and a recently rescued 12 year-old boy named Mick. In his absence some of the community went fishing, and all but one ate the fish they caught. Now they're all dying in agony, one by one, poisoned by whatever it is that has infected the fish. It's never revealed what precisely caused the community to fall sick and die, and that ambiguity just makes the episode feel even more ominous and paranoid. Was it really the fish? Did someone poison them? One of the dying woman tries to pass a message to Charles, but dies before she can say what it is.

Denis Lill gives a very strong performance as Charles, who seems an idealist to the point of zealotry. He is doggedly persistent and fairly persuasive too, but there's a fanatical gleam in his eye that rapidly becomes quite unsettling. The reasons for that unsettling edge eventually become clear: the message he failed to receive was that the woman was pregnant. So is Isla (Yvonne Bonnamy), the sole survivor of the fishing episode. So is Lorraine (Annie Hayes), who naively thought she was the only woman for whom Charles cared. Before long Charles is attempting to have sex with Abby too, and that's a massively uncomfortable scene that edges perilously close to a sexual assault - or at least an attempt at one. Charles is attempting to single-handedly breed a new generation of survivors. It's an enormously uncomfortable revelation, and Abby, Greg and Jenny pretty much leave him and his failed community right there and then.

This is the best episode since the pilot. It's uncompromising and uncomfortable, with no easy answers and no villain. It is just people in an awful, seemingly unwinnable situation, making the best choices they can. Sometimes correctly, and sometimes very poorly. Four episodes in, and the quality ratio remains at 100 per cent.
Posted by Grant at 5:39 PM