Doctor Who: "The Zygon Inversion" 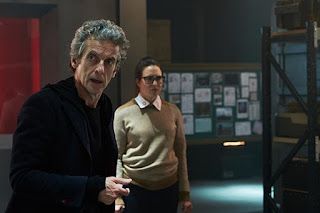 20 million shape-shifting Zygons live on the planet Earth. They've been living there via a secret arrangement with UNIT, only now the ceasefire has failed. UNIT has been disabled. Clara is a captive, her body being used to let a Zygon rebel leader assume her identity. Kate Stewart has been captured in the USA, and the Doctor and Osgood are about to get blown out of the sky by a rocket. Roll on part two.

I am absolutely adoring the string of two-part stories that have populated this season of Doctor Who. It's brilliant because it brings back the cliffhanger at the end of every second episode. Cliffhangers are part of what made the 20th century Doctor Who so wonderful and so addictive as a child. It's also brilliant because it's given stories room to breathe. There's more time now. Time for nuance, time for character development, and time at last for some proper storytelling. If "The Zygon Invasion/Inversion" had been told over 45 minutes it would have been a rushed, by-the-numbers and to be honest slightly tiresome episode. Told over 90 minutes though, and instead of a rushed, perfunctory climax you get several minutes of Peter Capaldi - one of Britain's most accomplished actors - acting his socks off at you.

This is Capaldi's finest episode of Doctor Who so far. He's not only really good: he's playing the character in such a wonderful fashion that you can get that rare glimpse of a single Doctor going back through all thirteen incarnations. Hartnell, Baker(s), McCoy, Tennant - they're all the same guy, and Capaldi sells it faultlessly. The dialogue in this episode shines, and the Doctor's climactic monologue is some of the best writing the series has ever had. Describing it further would be to spoil its impact. It's the occasional episode like this that reminds the viewer that the Doctor isn't just a wizard in a magic box but an actual rounded character with depth, personal growth and feelings.

This second part is much better than the first, which was a pretty damn good episode itself. Here a global crisis is rendered small-scale and personal. Doctor Who has always been much better at the small scale than the large, and Steven Moffat and Peter Harness do such an amazing job compressing this narrative down until it genuinely can be solved by a few people in a room.

The Zygons are marvellously realised. Modern Doctor Who has a fairly shaky track record when it comes to reviving its older monsters. The Daleks have delivered mixed results, but both the Cybermen and Sontarans seems considerably diminished by their contemporary takes. The Zygons are presented beautifully here, partly because their already excellent design has been pretty much preserved and partly because they're present to us as actual people.

Kate Stewart (Jemma Redgrave) gets a chance to demonstrate that she is very much her father's daughter, with the episode drawing out that classic Lethbridge-Stewart tension between listening to the Doctor's pleas for reason and pumping an alien full of bullets instead. Osgood (Ingrid Oliver) gets her best material in the series thus far, with the script delivering a version of the character that is smart, brave, relateable and quite frankly far beyond the one-note Doctor cosplayer that debuted back in 2013 during "The Day of the Doctor".

Oh "The Day of the Doctor". It was clearly this was going to be a follow-up of sorts to parts of that episode, but I was not expecting it to be such a direct sequel. It's not just that it explores the aftermath of that episode's first half - the Zygon invasion - it's that it uses the Doctor's experience in the second half to inform how he resolves the crisis here.

I cannot praise this episode enough. It's funny, dramatic, and inventive. It showcases all of its characters in surprising and wonderful ways. It ends on a beautifully haunting note as well: something about the Doctor's behaviour towards Clara has been weirdly off-kilter this season, and in "The Zygon Inversion"'s final moments it seems like a penny has dropped with the sound of an avalanche. I'm desperate to find out if the theory holds out.
Posted by Grant at 3:53 PM