Star Trek: The Next Generation: "The Best of Both Worlds, Part II" 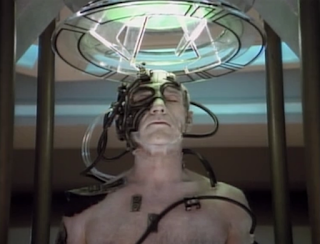 A Borg cube has arrived in the Alpha Quadrant. Captain Picard (Patrick Stewart) has been kidnapped and altered to become Locutus - a mouthpiece for the Borg's intentions and a source of intelligence on Starfleet strategy. With the Borg racing towards Earth to assimilate humanity, newly promoted Captain Riker (Jonathan Frakes) must find a way to destroy them even if it means killing his former commander and mentor in the process.

The middle of 1990 was a pretty exciting time for Star Trek fans. Season 3 of The Next Generation had unexpectedly ended on a monster cliffhanger, with Riker ordering the Enterprise to fire on a horrifyingly transformed Picard. Rumours were rife over the summer that Patrick Stewart was leaving the series, that Picard would die at the beginning of Season 4, and that guest character Commander Shelby (Elizabeth Dennehy) would be joining the series as a regular in his place.

The thing is: much as I adore both Jean-Luc Picard and Patrick Stewart's performance, it's difficult for me to watch "Part 2" without coming to the conclusion that it would have been a much better episode had that all been true. As a combined 80 minute narrative, "The Best of Both Worlds" is ultimately about William Riker learning to step out from Picard's shadow and becoming his own man. When the episode ends with Picard back in command and Riker stepping back under his shadow, it tends to defeat the entire premise of the exercise. It's the price of being a syndicated TV drama in the early 1990s: the format and the formula was king, and the status quo needed to be restored by the end of each 42-minute instalment.

In that regard "The Best of Both Worlds" is a ground-breaking moment for syndicated drama, since while Picard does return we soon learn (in the next episode) that things are not back to normal. The industry practice at the time was to ensure the series format and characters remained static from episode to episode, because that allowed each local station in the USA to run and re-run the episodes effectively in whatever order they wanted. "The Best of Both Worlds" changes that. The second part can't be run before the first, and the subsequent episode "Family" can't run without following both. There was a bit of a dry run of this new approach during Season 3, where "Sins of the Father" makes some fairly profound changes to Worf's relationship with the Klingon Empire, but that was essentially a minor note whereas the events depicted here are fairly shattering.

This second part gets a fair amount of criticism for being a substandard episode to the first, which is to be fair something that tends to plague Star Trek's two-parters. In its defence, while "Part 2" lacks the same impact it's still a damn fine hour of television. The Enterprise crew find an innovative solution to the Borg threat, and in the lead-up to that climax many of the characters get moments to shine and moments of character. The Enterprise's arrival at Wolf 359 to find almost 40 starships destroyed by the Borg in their absence, is a very powerful and sombre moment.

Picard's continuing modifications by the Borg are also a rich source of emotional power. Two moments stand out. In one we see Picard receive additional implants by a series of automated robot arms, with the scene pausing just long enough to see the tears in his otherwise emotionless eyes. In another, Picard is released from Borg control and is asked if he remembers anything. The standard answer in these sorts of scenes is almost always 'No', but the episode states the opposite. Picard remembers everything: being kidnapped, being modified, and being forced against his will to murder about 11,000 Starfleet officers. That's a frankly horrible thing to discover, and it's an issue to which the series will shortly return.

This is Riker's episode, and Jonathan Frakes continues to prove that he was possibly The Next Generation's most underrated asset. He plays a nuanced variety of emotions over the course of the episode: steely resolve in front of his officers, and introspective self-doubt when alone. Partway through he shares a fantastic scene with Guinan (Whoopi Goldberg), expressing his doubts that he can possibly defeat the man who effectively taught him most of what he knows. Of course by the episode's mid-point he's become an assured and confident captain and stands prepared to do whatever it takes to stop the Borg. It just feels like a shame that all of that development gets cast aside when Picard returns and Riker becomes first officer once again. All in all, however, this is a hell of a season premiere.
Posted by Grant at 5:03 PM