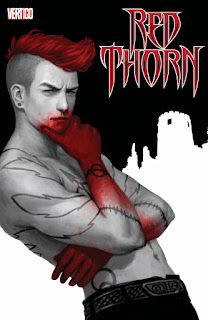 Jump back 20 years and DC's Vertigo imprint was the go-to place for intelligent, well-written comic books for mature readers. While Vertigo has marched on over the years, producing quite an impressive number of high-quality comics including 100 Bullets, Scalped, Northlanders, Fables and The Unwritten, its profile is certainly not as high as it once was and in very recent years it's struggled to find any significant successes at all. Basically all of the creators have been producing Vertigo's books for themselves via Image.

DC aren't taking this lying down, however, which is why we're in the middle of the biggest mass launch in Vertigo's history: 12 new monthly comic books, debuting one per week over three months. I have a lot of affection for Vertigo. My all-time favourite comic book, Grant Morrison's The Invisibles, was a Vertigo title. I figured I owed it to DC to sample at least one of their new books. Debuting this week is Red Thorn, a dark fantasy by writer David Baillie and artist Meghan Hetrick. The book follows Isla, an American travelling to Glasgow to investigate the death of her sister many years ago. It's an investigation involving mythical creatures and Isla's unexplained ability to draw pictures that transform into real people.

To be honest, I'm not feeling it. This issue feels remarkably derivative, less like a Vertigo book and more like a Vertigo fan having a go at writing one. The artwork is competent without being outstanding or distinctive. It all feels tremendously derivative, not to mention just a little bit too awkward and self-aware. It's biggest problem appears to be that it's trying to emulate the Vertigo of 20 to 25 years ago, rather than the Vertigo that the line needs to be today. Ardent fans of urban fantasy might get a kick out of it, but in the end it just left me cold. (2/5)

Under the cut: reviews of Batman and Robin Eternal, Usagi Yojimbo and Vader Down.

It's great to see Genevieve Valentine stick around in the DC Universe after her run on Catwoman ended: she's a tremendous asset to the line and if DC is smart they'll keep her around. This issue sees Dick, Harper and Cass head to Prague for a night at the ballet, while Jason and Tim head off gathering intel of their own. I absolutely adore the premise of this book, which showcases most of Batman's sidekicks while telling a story full of flashbacks and secrets. This is a great issue: beautiful artwork by Martinez and Fernando and sparkling dialogue by Valentine. (4/5)

A European envoy is travelling through Japan. When he defeats one lord's champion in a duel, he offered anything he desires - but what he desires is to see a Japanese man commit hara kiri. It's the 150th issue of Usagi Yojimbo, although if we're being honest it's actually the 209th since the book renumbered a long time ago. It is, however, the first time Usagi has ever encountered a European - and it's a pretty dark and unpleasant encounter. I love how Sakai can vary the tone of his comic so effectively: sometimes Usagi Yojimbo is very sweet, whereas others times - like here - it can be a little confronting. (5/5)

Marvel embarks on its first Star Wars comic crossover, as Darth Vader's pursuit of Luke Skywalker leads him to the planet Vrogas Vas and an entire legion of rebel troopers and pilots. It's all widescreen science fiction action, with plenty of opportunities for Vader to be immensely murderous and powerful, yet to be honest I wound up unsatisfied. First of all there's the premium price: US$4.99 for one issue. Then there's the extremely low panel count - turns out this really is widescreen action, with only three or four panels per page. The result is a story that looks gorgeous - Mike Deodato's artwork is great - but is both expensive to buy and quick to read. I want a lot more meat to the story, and all I get here is a fairly pricey opening premise. (3/5)
Posted by Grant at 7:44 AM