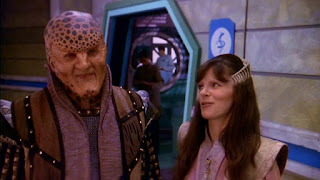 In "Strange Relations", Bester (Walter Koenig) arrives on Babylon 5 with orders to hunt down and arrest the community of rogue telepaths. Captain Lochley (Tracy Scoggins) seems happy to help him out as well, which enrages Garibaldi (Jerry Doyle).

Despite some now well-familiar problems with dialogue and rushed performances, "Strange Relations" actually manages to be a reasonably entertaining hour of television - something that's been in reasonably short supply during Babylon 5's fifth season. While it's still struggling with the execution of the rogue telepath story arc, it gives some properly decent material to Tracy Scoggins for the first time. She grabs it with both hands, and finally pushes her character away from being a last-minute Susan Ivanova replacement into a properly defined character in her own right.

To be honest the scripting of Captain Lochley hasn't really changed at all. It's the way Scoggins plays that dialogue and motivation that seems to make the difference. This is the most material she's been given in an episode so far, and she really works at it. Budget cuts to Season 5 led to shorter production shoots, so there's been a very haphazard and lackadaisical quality to many of the performances so far. It's great to see at least one member of the cast really push a bit harder and develop something more akin to the quality of Season 4. She shares a great scene with Jerry Doyle, finally explaining why she was Sheridan's choice for captain. There's an energy to that scene I haven't felt in the series since "Rising Star".

Bester coming for the rogue telepaths was a development that seemed inevitable from the outset, and it plays out in much the way one might expect. Bester wants them in custody, Lyta (Patricia Tallman) stands in his way, and the telepath leader Byron (Robin Atkin Downes) continues to come across as a deeply creepy and insincere charismatic cult leader. A final scene, with the telepaths gathered singing folk songs together, feels like it's supposed to be warm and uplifting but just comes across as deeply creepy and cult-like. If that was actually Straczynski's intent, then it's remarkably effective. If it wasn't, then it's a pretty major failure in terms of tone by director John C. Flynn III.

In terms of the overall series narrative, this episode serves to line up the pieces before a major conflict in the coming episodes. It provides some good material for Lyta, but Bester seems to be running on automatic. Koenig is always entertaining in the role, but it's easy work for him.

After the attempt on his life in "The Very Long Night of Londo Mollari", Londo (Peter Jurasik) requires a bodyguard. Delenn (Mira Furlan) chooses his long-time rival and former arch-nemesis G'Kar (Andreas Katsulas). It's a decision that makes no sense whatsoever. The Centauri would be severely unlikely to accept a Narn at the right hand of their future emperor, and Narn would seem to be unlikely to respect G'Kar working as a servant to the new head of the very government that only a year ago was brutally torturing and murdering hundreds of thousands of their race. G'Kar also still has a very important job as the representative of the Narn to the Interstellar Alliance. There is no logic to this story development in any way, except to make a few funny lines (that, to be honest, aren't remotely funny) and to ensure Londo and G'Kar stick together as a lame comedy act. It's a tragic change for the series' two best characters.

Tracy Scoggins pretty much single-handedly saves this episode. It's the fourth enjoyable episode of the season so far, after six in total. That's actually not bad: a quality ratio of 67 per cent. It's a cheap season, and it feels weaker and smaller than its preceding seasons, but there is still a fair amount to enjoy in Season 5 so far.
Posted by Grant at 9:17 AM