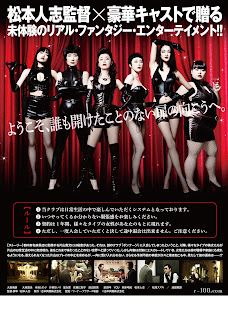 Takafumi Katayama (Nao Omori) is a meek furniture salesman. His wife is in a coma at a nearby hospital. His father-in-law helps with raising his young son. Lacking excitement in his life, Katayama signs up to a local bondage club - only there's a catch. His contract with the club will last one year, he cannot break it at any time, and leather-clad dominatrices may strike at any time to beat him senseless. On the street, in the park, in his house, at his workplace - before long Katayama is desperate to escape.

Writer/director Hitoshi Matsumoto is a stand-up comedian turned film-maker. He has directed four feature films to date. About a year ago I watched his second film, Symbol, and found it to be one of the most delightfully strange films I had seen in years. R100 is his fourth film, and while it's pretty much as odd and bizarre a movie as Symbol was I think it shows a major development in tone and range for Matsumoto. This film is not quite what it represents itself to be.

R100 could almost work as a sort of bondage-centric remake of David Fincher's The Game, in which a similarly bored businessman signs up for an exciting mystery adventure - only to discover he doesn't want to play any more. It's also oddly reminiscent of Fight Club in the manner in which Matsumoto continues to defy the audience's expectations. Ultimately it's neither of those things, because it presses on into much more left-of-field story developments and characters. It almost becomes Monty Python-esque from time to time - at any scene where the story gets too perverse or ridiculous, we suddenly cut to a group of five increasingly frustrated film executives. They bitch at one another about how inexplicable the film is becoming while tensely smoking cigarettes.

Nao Omori is excellent as the increasingly panicky and flustered Katayama. He's terrified by these women violently taking over his life, but he's aroused at the same time. Every time he becomes aroused the film pauses. A beautific smile crosses his face, and his cheeks widen and distort. Ripples of energy expand from his face. It's a decidedly odd motif, and one to which the film continually returns to increasingly comedic effect.

Also very memorable is Lindsay Kay Hayward as the bondage club's mysterious CEO. She certainly cuts a striking figure in a corset and ankle length leather jacket. She's also perpetually angry and violent with a bleached blonde hairstyle, and the only person in the film speaking English, and she's six foot nine inches tall. She's certainly not a villain one is likely to forget.

Having now seen two of Matsumoto's films, I'm already seeing a pretty firm pattern. Odd comedy, pushed to bizarre extremes, often lacking in context or explanation, structured and resolved in such a manner as to make half of the audience throw their hands up and throw popcorn at the screen. The other half - the ones in on the joke - are just going to clap their hands with glee and waiting for his next movie to come along. I'm definitely waiting for it.
Posted by Grant at 8:31 AM