Doctor Who: "Face the Raven" 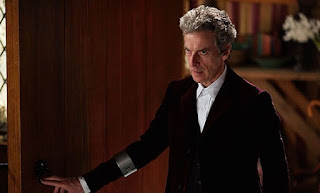 A telephone call from an old friend lead the Doctor (Peter Capaldi) and Clara (Jenna Coleman) back to present-day London, and to a secret street invisible to the humans around it. It's a refuge for aliens in hiding. Someone has been murdered, and the hunt for those responsible may not end as the Doctor has planned.

"Face the Raven" by newcomer Sarah Dollard is in some ways a difficult sort of episode to review. It's nicely thought-out and atmospheric, and boasts some excellent dialogue and character work. It brings back a likeable supporting character from last season - Rigsy (Joivan Wade) from "Flatline" - as well as one from this season - Ashildr (Maisie Williams) from "The Girl Who Died". Where it becomes difficult to properly assess is in its plot: there's not a great deal of it here, because it's actually the start of a multi-episode story. How successful the episode is at setting up story elements and presenting a satisfying narrative probably won't be known for another two weeks.

So there is a murder mystery, but it exists only to reveal that there's no murder at all - just a trap for the Doctor engineering by Ashildr on behalf of peoples unknown. Who set up the trap, and precisely what they want is a matter for the next two episodes. It does, however, mean that the bulk of the episode is relatively disposable: it doesn't exist to work in its own right, but simply to get the story from the Doctor and Clara hanging around in the TARDIS to the Doctor on his way to wherever his enemies want him. In that respect it reminds me a lot of Season 3's "Utopia", a similarly throwaway story designed solely to re-introduce the Master in its final moments.

This open-ended storyline also affects what is probably the part of the episode about which people will want to talk the most: the death of Clara. It's well staged and performed, with I think the perfect amount of tear-jerking drama. Capaldi is fantastic, railing against Ashildr before Clara dies and coldly warning her to never cross paths with him again afterwards. There's some great dialogue work here, and it makes me very keen for Sarah Dollard to return to write for the series in the future. The problem with the ending is that we've been here before: companions appear to die all of the time. Knowing that this is the first part of three does make me suspicious we're going to see Clara again before the season is out. It's a suspicion that prevents me from embracing the death scene for what it is.

I've really enjoyed the development of Ashildr over her three episodes this year, I'm still not one hundred per cent convinced by Maisie Williams' performance: she's solid enough, but her performances in Game of Thrones had set me up to expect something a little better than what I'm getting. It's a matter of being annoyed by something being good when I had anticipated brilliant.

The idea of the 'trap street' - an invisible street in London that only aliens can see - is a neat one, but it's also an idea I found a bit weakened by the production design. It's represented as a gas-lit cobble-stoned pedestrian street, which immediately brings to mind images of Neil Gaiman's Neverwhere or Harry Potter's Diagon Alley. It reduces the concept from a neat science fiction idea to a pop culture riff.

Overall this is a great dramatic set-up, but its ultimate success is entirely conditional on what it is that's being set-up. Nonetheless I enjoyed it a lot: Season 9's faultless quality ratio continues.
Posted by Grant at 12:38 PM