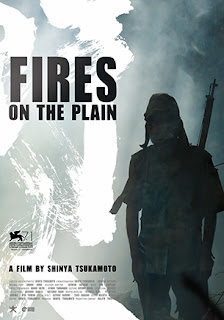 In the final days of World War II, a bullied soldier suffering from tuberculosis makes his way through the Filipino jungle in the hope of reaching his evacuation point in time. On his journey he encounters local guerillas, hides from the American military, and discovers the frightening extent to which desperate, starving men will go in order to survive.

That's the premise of Ooka Shohei's 1951 novel Fires on the Plain, which formed the basis for Kon Ichikawa's 1959 film of the same name. While Ichikawa's film received a mixed response upon its original release it has since been re-evaluated as one of the best Japanese films ever made. It would be a foolhardy venture for any filmmaker to attempt adapting the novel again with such an acclaimed film with which to compete. Thankfully Shinya Tsukamoto was up to the challenge.

Tsukamoto is one of the shining lights of Japanese independent cinema. His films are all either self or privately funded. They usually have an experimental edge and a confronting rough-hewn quality to them. His debut feature Tetsuo: The Iron Man became an international cult hit - so much so that he's generally better known and appreciated outside of Japan than within it. Last year he finally achieved a life ambition: to adapt Shohei's novel, which he first read in high school, in an all-new film.

The difference between the two films is palpable. Tsukamoto works to his strengths here. This is an aggressively personal work. He keeps the camera mostly hand-held, and overwhelmingly in close-up. We never leave the side of the protagonist, the sickened Private Tamura (played by Tsukamoto himself, as with most of his films), so we see pretty much what he sees. What he sees is absolute stark horror.

This is a very confronting film. The violence that is shown on-screen is relentlessly gory and wilfully grotesque. Soldiers are not simply shot in a clinical fashion and fall to the ground. They scream, they wail, they stumble about. Some lose limbs. There's one shot in particular that shows one soldier's foot slipping on the splattered brains of another. Many critics have slammed Tsukamoto's film for being little more than gore for shock value. I'd argue Tsukamoto is using gore to actually show what an active war zone can become. One sequence involving a group of Japanese soldiers getting ambushed by American heavy machines guns, is positively distressing to watch.

It's supposed to be horrible. It's war. It's not often noble and it's very rarely pretty. What's even more upsetting than the violence is the level to which the retreating Japanese soldiers sink. There's no more food. Half of them are dying of tropical diseases. More than a few grow suicidal, leading their comrades not to help them but to delicately walk around them in case they pull the pin on a grenade while someone else is around.

Tsukamoto's film benefits enormously from being shot on location in the Philippines. The lush jungle setting creates a claustrophobic effect. There could be an enemy around the corner, or behind a tree, or up a hill. When night falls it all becomes pitch-black, with just the unsettling sounds of roaming wildlife to pierce the darkness. If there's a criticism to be made of the film it's that it's a little short on plot, but to be honest with the violence and the environment I don't believe the narrative is the point here. The film is a place that you visit, rather than a story you are told.

Fires on the Plain is only 87 minutes long - to be honest you wouldn't want it to be any longer. It's a tightly packed, relentless and very harrowing experience.
Posted by Grant at 7:44 AM