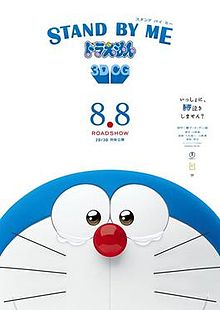 Since 1969 Doraemon has been a permanent fixture in Japanese children's entertainment. Originally the star of his own serialised manga, he soon graduated to TV animation. The first series was not so popular, but the second ran for a jaw-dropping 1,787 episodes between 1979 and 2005. A third series was on television before 2005 was out. In addition to the TV anime, there have also been 35 animated feature films since 2005. Nobita's Dinosaur was the first. Stand be Me Doraemon is the most recent, and marks a striking change in the long-running franchise. Rather than form part of the annual hand-animated series of films, Stand be Me Doraemon is the first CGI Doraemon film, and retells the key storyline of the original manga on the big screen for the very first time.

Nobita is a lazy and foolish fourth grader living in Japan. One day he is visited by his great-great-grandson, who reveals that the mistakes Nobita will make as an adult will bankrupt his family for generations. To ensure a better future comes to pass, and that Nobita will stay on the road to success, his great-great-grandson leaves behind Doraemon: a blue atomic robot cat armed with a four-dimensional pouch containing a wide variety of technological gadgets. In other words, Doraemon is essentially The Terminator for Japanese primary schoolers.

Stand be Me Doraemon takes six of the original manga storylines, including Doraemon's origin and ultimate departure, and weaves them together into a single 95 minute narrative. For long-term fans of the franchise, some of whom must be old enough by now to be bringing their grandchildren to the cinema, it's an exercise in nostalgia. For new audiences it's a fairly effective primer, since it takes them through more than 40 years of key storylines in less than two hours.

That said, it does seem to sag quite badly in the middle, and it's a little too easy to lose attention, check your e-mails on your phone, and otherwise get distracted. It's the episodic nature of the film that does it: while the manga storylines are reasonably well selected, they don't really interact with one another. Instead it's a bit like watching a bunch of TV episodes run up against one another, and it all gets a little repetitive.

The film is very well animated, taking the manga designs and translating them to three dimensions without too many significant changes. The animation is not excessively detailed, likely due to the film's smaller-than-Hollywood budget, but it moves well and copies a lot of comic movements and beats from the older hand-drawn features. The colours are vivid and expressive. In some of the film's more enthused moments the digital camera movements get rather active and frantic, partly I suspect to showcase the 3D (for the record, I watched the 2D version) and partly due to its co-director, Takashi Yamazaki (Returner, Space Battleship Yamato).

As a special one-off event, Stand by Me Doraemon is a pretty enjoyable experience. It's far from perfect, but it is a fun new take on some very old and much beloved characters.
Posted by Grant at 6:15 PM