Doctor Who: "The Zygon Invasion" 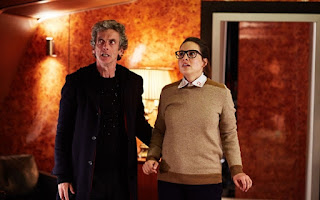 When Doctor Who featured the Zygons as the villains of its 50th anniversary special it seemed an exciting and inspired choice. They'd only previously appeared once before, in the widely loved Tom Baker serial "Terror of the Zygons", yet had made such an enormous impression on general viewers and fans that they have never been forgotten. While "The Day of the Doctor" was a marvellous special it did seem to short-change the Zygons more than a little, disposing of their storyline with an abrupt forced peace negotiation so that the episode could instead focus on the Doctor himself and the Time War.

What a wonderful surprise, then, to return two years later and not only give the Zygons their own two-part storyline but to actually focus on the consequences of that hurried peace arrangement. Since the events of "The Day of the Doctor" there have been 20 million shape-shifting Zygons living in peace across the planet Earth. Now a rogue faction within their population has decided to reject the treaty and carve out a piece of Earth to call their own - unless the Doctor and UNIT can prevent them.

This is a marvellous episode of Doctor Who. It's a tightly paced international thriller set across three continents as the Doctor (Peter Capaldi), Clara (Jenna Coleman) and UNIT head Kate Stewart (Jemma Redgrave) split apart to overcome the crisis before it spills out of control. It also manages to be a great sequel, actually dealing with the consequences of the Doctor's rushed and fairly pat solution to the original invasion. On top of that it works marvellously as a social commentary, clearly using the Zygons as an analogue for Islam and their rogue faction as radicalised terrorists. It's a fairly brave subject matter to address, particularly since the episode makes little secret of what real-life social issues it's handling. How successfully it goes will depend pretty much entirely on the concluding episode next weekend. For now it's doing a particularly fine job.

Notable among the returning characters is Ingrid Oliver as Osgood, the UNIT scientific advisor and Doctor fangirl who was famously (and controversially) murdered by the Master during last year's season finale. Of course by the end of "The Day of the Doctor" there were two Osgoods - one human, one a Zygon duplicate - so it wasn't a surprise to see that one did die at the Master's hands last year, leaving the other to return here. What's particularly impressive is that the remaining Osgood refuses to confirm which one she is. It's an admirable moment of character, and it's an impressive exploitation of pre-existing plot threads. I may be biased - I was already a fan of Ingrid Oliver back during her sketch comedy series Watson and Oliver - but I really hope the character sticks around in the series for a while, possibly even as a new companion. After everything she's been through she deserves at least one trip in the TARDIS.

It's interesting to see UNIT return, now run (commendably without comment) almost entirely by women. There's not just Kate and Osgood in this episode, but also Jaye Griffiths as Jac and Capaldi's former The Thick of It co-star Rebecca Front as the trigger-happy Colonel Walsh. With Front's appearance coming on the heels of Chris Addison in "Death in Heaven" it does make me wonder if the series is going to cycle through all of Capaldi's former Thick of It associates. Certainly I would gladly enjoy a future episode written by Armando Iannucci.

An alien invasion of Earth, UNIT soldiers, the Doctor arguing with a Stewart over the use of force, blunt social commentary - fans of the Jon Pertwee era in particular will be rolling around like pigs in poo. For me this is the strongest episode of Season 9 thus far, which really is shaping up to be one of the best years Doctor Who has ever had.
Posted by Grant at 11:35 PM