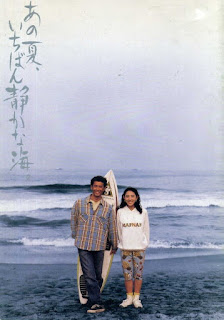 Shigeru (Kurodo Maki) is a garbage collector in a coastal Japanese town. He's also both deaf and mute. One day he finds a broken surfboard left out for collection. After repairing it the best he can, he sets out on a quest to learn how to surf. Over the summer, as his skills improve, he forms a romantic relationship with the similarly deaf young woman Takako (Hiroko Oshima).

A Scene at the Sea, by writer director Takeshi Kitano, is one of those maddening films that makes a mockery of film genres. We always want to pigeon-hole films: is it a drama, or a comedy, or an arthouse movie? In this case it's all three, jumping from slapstick comedy to thoughtful drama to bizarrely detached scenes where nothing much seems to happen at all. It is a 100 minute movie with the sort of narrative that would usually struggle to fill half an hour. It has hardly any dialogue. It spends minutes at a time just watching its characters walk to and from the beach. It's not easily categorised into any genre at all. It's simply a film to climb into and experience. It's a wonderful place to visit.

The romance between Shigeru and Takako is simple, unspoken and heartfelt. It's a relationship almost entirely comprised of hesitations and calm glances. The film never makes a particular issue out of their disability,  at least not beyond the occasional plot point - in one early scene Shigeru fails to enter a surfing tournament because he doesn't feel his name called. Maki and Oshima give the most subtle performances I can remember seeing in ages: they present a strange contemplative quality that almost feels like a blank slate for the viewer to fill in.

Around them is a group of humorous supporting characters. There's the rich kid with an expensive surfboard and wetsuit who doesn't know how to surf. There are the two amateur footballers who buy a secondhand board between them and spent the whole movie bickering over whose turn it is to use it. There's the lonely girl who moves from one surfer to the next, always asking them to peel an orange for her as a romantic overture.

Kitano shoots the film mostly in middle and long shots, and uses inordinately long and static takes throughout. It helps to give the film its strange peaceful quality. It forces its viewers to slow down and take the experience at a gentle pace. I suspect some of those viewers will find it a very frustrating film as a result, and certainly those coming to it expecting Kitano's popular style of violent police-versus-yakuza action will be disappointed.

The film marks the first collaboration between Kitano and composer Joe Hisaishi, best known for his wonderful Studio Ghibli scores. His electronic score here is much more sparsely arranged, but nicely matches the calm aesthetic of the visuals.

This is a very specific kind of a film, and it absolutely needs to be embraced on its own terms to be in any way satisfying. With patience, however, and a quiet afternoon in which to watch it, it's a remarkable experience.
Posted by Grant at 7:13 AM