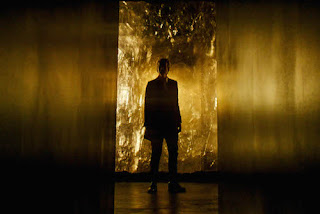 Clara is dead, and the Doctor has been teleported to a mysterious castle. It's thousands of years old. Its walls keep shifting and transforming. There are television monitors everywhere, showing the point of view of a shambling, hooded creature that is slowly stalking the Doctor. There is no escape.

Let's talk about Steven Moffat. When Doctor Who finally returned to television in 2005 it was Moffat who seemed most highly praised. His two-part story "The Empty Child" was seen by many as the best of the first season, and then he continued to impress fans and viewers with "The Girl in the Fireplace", "Silence in the Library" and particularly his Season 3 episode "Blink" - widely regarded as the single-best episode of 21st century Doctor Who. Who knows? Maybe the best ever.

When he assumed control of the entire series in 2010 things seemed to suddenly get a lot more contentious. Some fans bristled at the sudden excess of sexual innuendo. Others loathed his choice for a new Doctor. Still more hated his baffling, time-twisted story arcs. I personally loathed Clara Oswald. I tried, I gave her many chances and over her two-and-a-half seasons she did admittedly improve. I still didn't like her.

For quite a while now there's been a growing muttering of fans wishing Moffat would leave the series and let someone else take over. That muttering grew to a roar, until for much of last season you could barely move around the Internet without some disgruntled fan demanding his resignation. That clamour for the executive producer's head has died down somewhat this year, mainly due to some pretty impressive scripts, but it's still there. The bottom line is that nobody can hate Doctor Who with the energy of a Doctor Who fan.

It's typical of fans, really. They never had it so good. There has never been an executive producer so willing and able to push the envelope and try to find out what you can do with the Doctor Who format. A Doctor Who story without the Doctor in it? A romance for the Doctor? A marriage for the Doctor? Inventing a new Doctor we never saw on television? Showing the Doctor as a child? Casting a man in his twenties as the Doctor? Producing a found footage episode? Having time-travelling characters meet one another out of order? He's done all of those things. He's been hands-down the most creative and risk-taking producer the series has ever had. He's been doing it ever since he first connected with the series - with a short story told entirely from the point of view of someone whose history the Doctor keeps changing, and a comedy skit for Red Nose Day that introduced the first-ever female Doctor.

Now it doesn't always work. An attempt to re-imagine the Daleks back in 2010 failed terribly. Many elements of the long-term story arcs had a tendency to not make enough sense. If you throw this much at a wall not all if it is going to stick. The question to be answered is this: is it better to play it safe, tell some rollicking adventure stories but never make a memorable episode, or is it better to really see just how far Doctor Who can go, and accept there's going to be some bad episodes along the way?

"Heaven Sent" isn't one of the bad episodes. It is the opposite. It's an enormous creative risk, quite possibly the biggest one Moffat has made in his time with the series. The Doctor alone in a puzzle box, hunted by what looks like Death itself, talking to himself, trying to solve an impossible conundrum. In many respects it's the opposite of "Blink": that was a Doctor Who adventure where the Doctor wasn't there to save the world. "Heaven Sent" is an adventure where there isn't a world for the Doctor to save.

Thank goodness for Peter Capaldi as the Doctor: he owns this episode - there's no one else to own it - and he does an absolutely brilliant job of it. I don't think we've ever seen the Doctor express such a variety of emotion here. There's no one else to see him, of course, so to an extent the facade is dropped for once. He can be angry. He can be afraid. He is free to grieve. There's a beautiful touch to Moffat's writing that the Doctor is such a lonely old man that he'll invent a non-existent Clara in his mind just to have somebody to talk to and impress.

It's also a marvellous return to the sort of fable-based, fairy tale tone of Moffat's original season. I adored his early episodes with Matt Smith, which deliberately pushed a sort of fantastical storytelling aesthetic, and it matches the narrative perfectly. The story is ultimately framed by an old folk tale, one example of which can be found at the beginning of Hendrick Willem van Loon's The Story of Mankind. That version goes like this: 'High up in the north in the land called Svithjod, there stands a rock. It is a hundred miles high and a hundred miles wide. Once every thousand years a little bird comes to this rock to sharpen its beak. When the rock has thus been worn away, then a single day of eternity will have gone by.' It's typically smart of Steven Moffat to make the Doctor the bird.

It's also a remarkable expression of what grief feels like: an eternity.

The episode's climax makes an extraordinary impression. Its first half effectively emphasises the futility of the Doctor's situation. He's doing the same thing, Groundhog Day-style, again and again for thousands of years. Then tens of thousands. He ends the day pointlessly smashing his fist into an impregnable rock.

Then something in this tearful, futile montage changes. It's not futile. The Doctor is making headway in punching through a rock, one microscopic fragment at a time. Years pass. Then centuries. Then millions of years. Then even longer. It's not futile. It just takes a really, really long time to win. That's what the Doctor does, after all: he wins. I found myself tearing up at the climax, not when it was hopeless but when it suddenly became full of nothing but hope.

With just Peter Capaldi running around a castle, it's down to the rest of the episode to support him. The production design is strong. Murray Gold's musical score is the best he's ever done. Rachel Talalay's directon is stunning: well-paced, beautifully edited and very worthy of the episode's extended running time (54 minutes instead of the usual 45).

With Capaldi changed into his fabulous red velvet coat it's difficult not to see his resemblance to Jon Pertwee's Doctor, and his final excruciating crawl to the teleporter room to Pertwee's agonising final scenes in "Planet of the Spiders". Much as I enjoyed David Tennant and Matt Smith's Doctors, I did always find it a little difficult to reconcile their characters with all of the Doctors that came before them. With Capaldi it all feels like the same man.

The episode also boasts what would have been an Internet-melting cliffhanger, had the BBC not spoiled it several weeks ago in a press release. Putting that disappointment aside, "Heaven Sent" is a remarkable hour of television: beautifully crafted, wonderfully written, perfectly acted. I was commenting back when "The Zygon Inversion" had aired that Peter Capaldi finally had a bona-fide classic episode. Now he has two - and one of them's a masterpiece.

(Correction: an earlier version of this review misattributed the story of the bird and the mountain to van Loon's The Story of Mankind. While von Loon used the folk story he did not create it.)
Posted by Grant at 5:56 PM