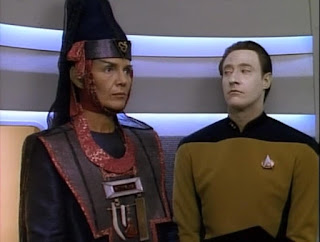 It's 7 January 1991, and time for more Star Trek: The Next Generation.

In a personal log sent to a Starfleet researcher, Commander Data (Brent Spiner) recounts the events of a single 24-hour period onboard the USS Enterprise. It's a day that involves a wedding, a birth, learning to dance, a mysterious Vulcan ambassador and the possibility of peace between the Federation and the Romulan Empire.

All the way back in 1972 the TV comedy M*A*S*H turned a lot of heads with its inventive first season episode "Dear Dad", in which Hawkeye narrated a letter to his father about the goings-on at his field hospital. The episode was so popular that M*A*S*H returned to the format on what seemed like an annual basis. I'm guessing the writers room at Star Trek: The Next Generation liked the "Dear Dad" format as well, because they've stolen it for "Data's Day" - and it's marvellous.

It's a great idea to showcase a single day in the Enterprise's operations, because it allows the viewer to see a whole pile of things that we wouldn't normally witness. This begins with the night shift on the bridge: obviously the regular cast can only staff the bridge for eight hours of the day, leaving another 16 unaccounted for. We begin the episode at the end of such a shift, with Data in command as second officer. It's amazing how much such a short scene can make the Enterprise feel a lot more believable and real.

Data is the perfect choice of protagonist for this sort of episode as well: he's an android and doesn't sleep, which means the script can keep him active in the story for the whole 24 hours. His curiosity and naivete regarding human behaviour also allows the script to present everyday behaviours from a fresh and often-times amusing angle. This is, despite some serious elements in the plot, a very light-hearted episode. It's not a comedy per se, but it's certainly very warm and amusing.

The episode also makes a huge leap in the presentation of transporter chief Miles O'Brien (Colm Meaney). To date he's been a named character with a job to perform, but hasn't received much in the way of back story or depth. That all changes here: it's his wedding that features in the episode, which requires him to have a private life at last and a bride: Keiko (Rosalind Chao). Within two years both characters jump ship to Star Trek: Deep Space Nine. The foundations of that series begin here (and get followed up in the next episode too).

The main dramatic plot of the episode - a Vulcan ambassador arranges a secret peace negotiation with a Romulan admiral, only to die on the transporter pad - is relatively slight, but then it doesn't need to be too fleshed out. The moment-to-moment experience is what makes the episode worthwhile, rather than where it's going.

This is a bright, wonderfully enjoyable episode. With nine good episodes out of 11, Season 4's quality ratio rises again to an impressive 82 per cent.
Posted by Grant at 7:59 AM