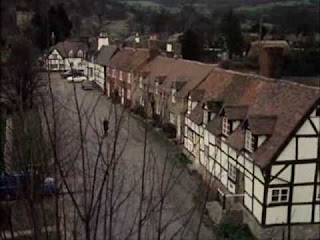 Terry Nation will long be remembered for his contributions to British television, chiefly for his creating the Daleks for Doctor Who but also for creating and writing Blake's 7. In between he also created the 1975 post-apocalyptic drama Survivors. It's not quite as well known as his other two creations, most likely because - if we're to be frank - it's not quite as good. It does have much to recommend, however, and as I've enjoyed watching through both Blake's 7 and fellow 1970s BBC series The Omega Factor it seemed reasonable enough to give Survivors a rewatch as well.

The first episode, "The Undiscovered Country", shows the sudden and catastrophic collapse of human civilization after a fast-spreading plague-like virus sweeps across the planet. It's told from the perspective of two women: twentysomething Londoner Jenny Richards (Lucy Fleming) and rich country wife Abby Grant (Carolyn Seymour).

As a mid-70s drama it's quite important to consider Survivors in a historical context. By the standards of 21st century television it's hilariously mannered in places, particularly when it comes to early scenes of Abby and her businessman husband David (future sitcom star Peter Bowles). When the virus finally hits, however, it turns out that this sort of antiquated staginess is very effective. It gets brutally punctured by all of the dead. Abby, who contracted the virus but survived it, wakes to a deserted house. It's only when she's pouring herself a drink to calm her nerves that she notices her husband's corpse on the couch through a mirror. While walking through her eerily silent village she finds an abandoned territorial Alsatian and a church full of huddled dead bodies. Such scenes were likely a bit confronting for audiences 40 years ago, but viewed today and the sudden stark contrast is doubly effective.

While Abby provides the perspective of someone in the countryside, Jenny allows the series to explore the effect of such a virus on a big city. Her flatmate is dying and she rushes to a hospital to get help from a doctor friend, only for him to urge her to escape London as soon as the possible. It's not the virus that he fears - she's clearly uninfected - it's the onslaught of potential diseases once the city lies dead and the bodies start rotting. The city's already beginning to collapse during Jenny's escape - she narrowly escapes being raped by three youths. As with Abby's side of the episode, it all suddenly becomes remarkably bleak and confronting.

Towards the episode's end Abby drives to her son's boarding school, only to find him and 30 other students missing. The rest - about 300 - are all dead. The sole survivor is Bronson (Peter Copley), a sole surviving member of staff who points out to her just how desperate her situation shall be. The majority of the world's population are already dead. Civilization has collapsed. The conveniences and assumptions of 20th century life - power, fuel, food, clothing, shelter - are all essentially lost or running out. Most fictions based on viral outbreaks focus on the threat of escaping the immediate crisis. By the mid-point of "The Fourth Horseman" the crisis is already over: now there's just the ongoing, difficult aftermath.

While the ensuing series may waver - Survivors ran for three seasons - this is a very strong and effective premiere episode. It exploits the limitations of the BBC production style marvellously, showing only limited scenes of devastation but talking a lot instead. It forms a harrowing and depressing picture in the mind, and is remarkably effective while doing it.

And how refreshing is it to see an episode like this focus so firmly on two female protagonists. Lucy Fleming does a very believable and engaging job as Jenny, but it's Carolyn Seymour who gets the best material. Abby begins the episode playing tennis against a ball machine outside of her lavish country house, before popping inside for the housekeeper to make her a drink while she talks to her son on the telephone from his boarding school. She ends the episode alone, her hair deliberately hacked short for convenience, her house burning on the horizon, her husband's body burning inside it, and setting off in the desperate hope of somehow finding her son alive. Seymour does a tremendous job throughout, making such a sudden and awful transformation believable and immensely gripping to watch.
Posted by Grant at 4:56 PM